on January 01, 2010
It's New Year's Day and for some reason my thoughts turn to Kafka. You'd think Sartre or Camus instead, right? all existentialist about the new decade and so on, but no, it's Kafka's books that are staring at me from my bookcase. 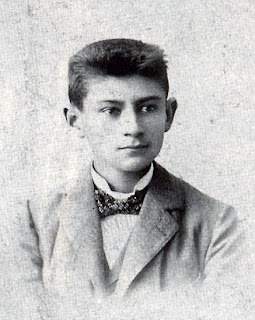 I read The Trial while I was still in university some three decades or so ago, and no book since has stayed with me to the same degree. Over the years since, I've read many interpretations of the work, and most interpretations and discussions dwell on asking “who is punishing him for what?” The big question for most people, (and university lecturers, apparently,) is what is he on trial for? - as if that were somehow a key to understanding the book.

I think they miss the point. I think I have an insight they don't. He had to pay the bills like anyone else, and though he hated it, he worked in insurance for some years. He understood very well the way human suffering (at one point, he assessed personal injury claims) is dealt with by reducing it to statistics and procedures. 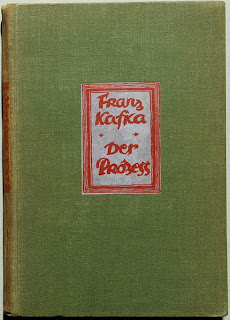 and the family court system, and what he's captured perfectly is the experience of being the fly trapped in the machinations of bureaucracy, the icy heart of which allows each of the many cogs in its wheels to believe themselves not responsible, the way everyone only does their tiny bit, the next step in the procedure, then passes the file along to someone else, so there is never anyone who actually knows what it going on, no one is ever actually responsible for knowing or keeping track of the whole situation, the way it reaches a point where it truly doesn't matter anymore what the trial was about or where it started, it's only about getting through this next procedure, this next filing, this next day. That's what he's talking about, I'm sure of it. Bureaucracy as the ultimate evil.

I've only read Kafka in German and French, as it happens, (books bought during my uni days,) and while the French is rather interesting, I think the German, which was Kafka's language, with its very concrete 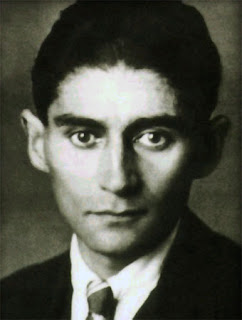 nature, is intrinsically suited to the depiction of that icy heart of bureaucracy. In our modern era, we now believe that Kafka suffered from social anxiety and clinical depression - is that how he was able to see all of this so clearly? I read a review of a biography of Byron recently, where the thought was posited that, in this day and age, he would have simply been pharmaceutically treated for his obvious sexual addiction - and perhaps silenced, because isn't that where his greatest work came from? Are we muzzling a generation of great artists and thinkers with Effexor and Paxil? I think we might. I teach creative writing courses, and I will often tell my students, we do this because we can't afford therapy...

In very fitting coda to this whole piece, the Onion's Business Week report named Prague's Franz Kafka Airport as the most alienating in the world - I get all my news from the Onion!
der prozess franz kafka prague airport the onion the trial