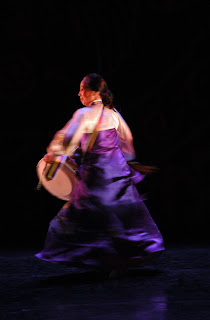 In the programme for Thundering Roar, Mi Young Kim says her intent is "to show my audience the great range of style and dynamics in Korean dance", and I think the show lives up to that principle. From the slower, more contemplative mood of the opening half to a rousing, colourful finish, I left feeling I'd been shown just that.

Korean dance is often about storytelling, and the first half of the show tended to stay in that mode. The dancers were largely in white - flowing white robes, white caps, with an occasional bright red sash, or black sleeves. Only the hands, and dramatic outlines of the faces are visible. The robes themselves become part of their deliberate movements, either singly or in groups. Heung Sup So took the male role in Mong Yeong (A Love in Dream), a narrative piece. In Crossing, Kim teams up with Sashar Zarif, a proponent of Azerbaijani dance. It's a work that examines the affinities between Korean Buddhist dance, and the shamanic rituals of Korean and Iranian traditions. Zarif, by the way, has a remarkable history, having immigrated to Canada in 1988 from Turkey as a stateless refugee of the UN. Having lived in India, Azerbaijan and Iran, among others, he blends those traditions into a style he calls his own. The stylistic similarities between the swirling movements - including robes - and use of percussion and dance together made for a thought provoking piece. 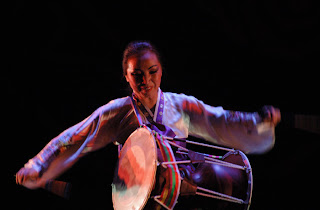 The second half was more colourful, both in costumes and intent, including drum dances both solo and in company with the Jianggo, an hourglass shaped drum, (in the images, Kim performs a solo changgochum at SooRyu 2007). A highlight was five of the ladies doing a drum dance in synch - you can check out a clip of the company doing a similar dance here at SooRyu 2006, Kim's annual Korean dance event.

The most modern of traditions was featured in the form of B-boys from the Hip Hop Symphony, a quartet of young men who know how to put on an energetic performance. In the end, the elegant ladies and street dancing boys get together for Soo Ryu Drum Dance in a finale that ends on a real high note.

Kim notes that many of the pieces are yet works in progress, but they're polished enough for an enjoyable start to your Saturday night if you're so inclined.
azerbaijani dance korean dance mi young kim sashar zarif toronto dance