Madagascar Slim, as he's been known to blues/roots/world music fans in the Toronto area for decades, 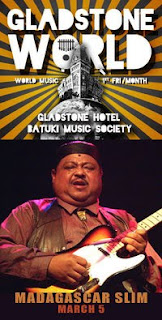 was born as Randriamananjara Radofa Besata Jean Longin in Antananarivo, capital of the sunny island of Madagascar. Teaching himself to play an older brother's guitar at an early age was just the beginning of a long career.

"I grew up listeninig to a lot of music from Madagascar, traditional music. At the same time, Western music was very popular, like the Rolling Stones, Santana. I listened to that type of guitar driven music."

Salegy is the traditional Malagasy style Slim grew up with. Here's a little modern salegy if you're not familiar.

It's the kind of music that won't let you sit still, and involves really intricate finger picking - among other things.

"First, I was trying to play note for note, people I like - like B.B. King. But over time, I discovered things on my own. I came up with my own style. It's improvisational." Madagascar Slim's work is often called "bi-cultural", which sounds a little too pedantic for his infectiously likable music. "I would describe it as an amalgamation of Madgasy music, particularly the rhythmic elements, with guitar rock." study accounting at Seneca College) it's the rhythms of his childhood that still echo most deeply. "I have a rhythm that I hear in my head that comes from Madagas," he says. "It's a different way of keeping time - the 6/8, they hear it as a jig. I hear it as Madagas."

Sweet voices and harmonies come together with that fluidly kinetic guitar playing. Along with this solo work, he's also known and been recognized for his work with Tri-Continental - Roots & Traditional Album of the Year Juno Winner in 2001 - and African Guitar Summit - World Music Album of the Year in 2005. His third Juno was won in the same category in 2000. For Slim, it's all about playing though.

"I've played in all the blues clubs in Toronto," he says, either alone or in collaboration. He's also known for his live playing with blues singer Ndidi Onukwulu. He's seen musical tastes change over the decades. "A lot of people are branching out, listening to new types of music," he says. Slim points to the influence of the internet, where more and more people are reaching out to find music that falls beyond the confines of a commercialized pop music market, along with the importance of some of the country's cultural institutions. "That's why we need institutions like the Canada Council for the Arts and the CBC - to offer an alternative."

The concert this Friday at the Glad is FREE of charge - I'll be sure to get there early.

Check out an excerpt from a documentary that followed Slim on his return to Madagascar after 25 years - and you can download his music here.
african music gladstone hotel madagascar slim madagasy music toronto world music