"Legend" is a word that can be bandied about perhaps a little too readily in the world of arts and entertainment, but in the case of dance diva Peggy Baker, it's really the only just term. After founding Dancemakers in Toronto in 1974, she toured extensively with New York's Lar

Lubovitch Company in the 1980's, then joined with Mikhail Baryshnikov and Mark Morris for the inaugural season of their White Oak Dance Project. As a choreographer, she works through her Toronto based Peggy Baker Dance Projects. She's Artist-in-Residence at the National Ballet School, recipient of the Premier's Award for Excellence in the Arts (2006), three Dora Mavor Moore Awards for performance and two for choreography, she's a member of the Order of Ontario, Order of Canada, and won the 2009 Governor General's Performing Arts Award for Lifetime Achievement in the Arts. Whew!

The life of a dancer, inevitably, is a finite one, and in recent interviews, Ms Baker has contemplated the end of that part of her career. Lucky for us, though, that it hasn't happened yet, and lucky for audiences in the Toronto region, her newest work, confluence, is on stage now until the 28th at Harbourfront. As she describes it in programme notes, the set of three dance pieces was inspired by the work of Montreal artist Sylvia Safdie along with the science essays of Lewis Thomas in his decades old work The Lives of a Cell. The first two, earthling and coalesce, Baker choreographed, and the final piece, armour, was choreographed by NYC based Doug Varone.

If you've ever watched insects, or cells in a microscope, you will have seen their elegant, often repetitive, and sometimes impassioned movements, the cause and effect of which remain a complete mystery to our understanding. That's the sort of movement that is captured in 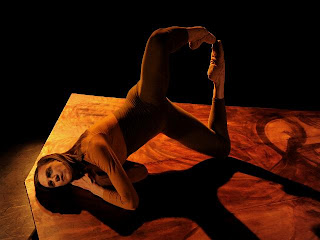 confluence, from the opening of earthling, a solitary exploration of that idea. In it, Baker's limbs and torse seemed at times to move entirely independent of each other, while staying almost entirely in a horizontal position. "...collective societies with the capacity to behave like organisms." so mentions Lewis Thomas in The Lives of a Cell, and that's how the trio of Kate Holden, Sean Ling and Sahara Morimoto perform coalesce, a fascinating and absorbing piece. At times their movements are independent of each other, at times echo each other, and at times they are perfectly in synch, with an obtuse sense of purpose - obtuse, as if originating from some other kind of consciousness or awareness, yet at the same time, we can (or believe we can?) perceive moments where we find recognizable emotion. armour, a duet between Baker and Larry Hahn, watched the two veteran dancers explore the idea that "It is the being touched that counts, rather than the touching." - another quote from Thomas' book - in a piece performed horizontally. They tangle and untangle in a kind of sculptural display.

As a whole, confluence is a seamless marriage of performance and staging, thanks in no small part to Marc Parent's ingenious and very effective lighting design. Smoke was discretely puffed into the EnWave Theatre, and spots came from near the ceiling two floors up to create an otherworldly, diffused glow for Baker's solo piece. In other segments, the light came directly from the sides, or left the figures in outline. Self taught, Parent has been lighting up Montreal's vivid dance scene for more than 25 years.

It adds up to a really engrossing hour+ of contemporary dance that, like all great art, makes you see something in a different way.
confluence contemporary dance harbourfront centre lewis thomas peggy baker sylvia safdie toronto dance scene

Indie Alt-Rock Galactic Fuzz: Galactic Fuzz (Independent / 28 October 2022 Stream The Single Transparent Transparent is the preview release for the eponymous upcoming album by Galactic Fuzz. It's an alt-rock track with an instantly recognizable feel, driven by insistent guitar rhythms. The verse has an earworm groove, but then takes a detour into the interesting rhythms and contrapuntal vocal lines of the chorus. It's alt-rock with an intellectual approach to the music that adds intriguing texture. My one quibble would be that the vocals could come up louder in the mix - the lyrics sound interesting... I think, and those great vocal effects are somewhat muted.  Vocalist/guitarist and songwriter Javier Guell says in a media release, "I've always loved singing, but had mostly been a backup singer and lead guitar player in all my bands. The inception for Galactic Fuzz was my decision to sing my own songs for a change, as I had always written for others to sing.  The name