Going Off-Off Broadway for Wake-Up Marconi! and The Weird

On my latest venture to New York, (just got back this morning!) I went off-off Broadway to discover The Weird, a funny, well acted show at Manhattan Theatre Source, snugly ensconced in Greenwich Village. The Weird, by Roberto Aguirre-Sacasa, consists of a series of six 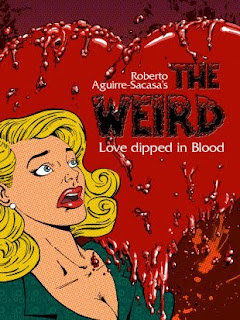 short-ish scenes based on pulp fiction, mixing horror, camp, sex and pop culture and played out by a cast of six young actors who were clearly having great fun with the material. The scenes were connected by Mark Rosenthal's ghoulish M.T. Brave as a sort of emcee for the damned.

The venue is small, perhaps 50 seats or so in an upstairs room of what was once a residence by the looks of it, but the staging made clever use of the limited space and a few generic props. The appeal of the show lies entirely in the cast in any case, who attacked their roles with delightful gusto. Each brought a different quality to their various and sundry roles, like Allison Hirschlag's gleefully demented Southern belle or hapless Rosemary in The Ten Minute Play About Rosemary's Baby, or Melissa Pinsly, a chameleon who went from winsome assistant to Cohn's soulful scientist (a story of repressed desire - and bugs) to Rosemary's creepy older neighbour to that pulp fiction staple, the bored, dissatisfied housewife without skipping a beat. Without listing everyone in every role, suffice it to say that, from feckless teens on their way to Shadow Lake to overweight Southern boor to vampire/overnight appliance repairman, they maintained the overheated pulp mood without letting it drop, aided by Aguirre-Sacasa's cleverly written script.

It's cute, fun, funny, and probably the best theatre bargoon in town at a mere $18 a pop.

Both Wake Up Marconi! and Manhattan Theatre Source are on my list to keep an eye on for future productions and such - check them out at the links above.
Allison Hirschlag greenwich village theatre Lucky Gretzinger manhattan theatre source Mark Rosenthal Mark Stetson Matthew Cohn Melissa Pinsly new york Wake Up Marconi