The Year of the Tiger - Tigers in Film

Tigers are my favourite animal, (although I have more than one or even two faves). I actually met a tiger live and in person once, when I was modeling for animation classes at Sheridan College. 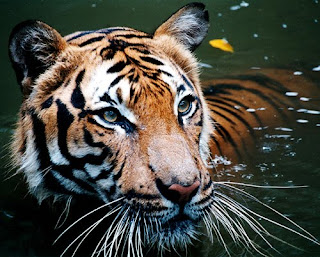 They would hire this tiger to come in and model too, once in a while, and one time, I worked for the first 2 hours of the class, then they got the tiger (Qaadesh was her name,) to come in for the last hour. I had dressed already, and was waiting on the model stand, a kind of raised podium, to check her out. Someone just opened the door, and in she walked. Huge, bigger than you think in person. Qaadesh had been hand raised from birth, and she used to do shows with strippers and such. Anyway, in she comes, and lies down in front of the podium, but of course they wanted her to get up on it to see her better. Her owner prodded her a little to get her to step up on it, and she let out a complaint, not a roar, but a throaty growly sound that made me think, if I had a tiger, I'd be very, very nice to it always. Qaadesh turned finally and stepped up on the podium, and that's when she spotted me sitting on 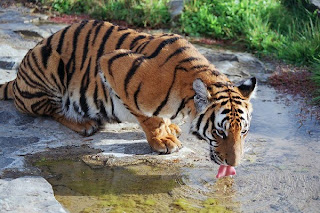 the opposite edge. She made a beeline for me, and I heard the owner saying something about her wanting to be petted around her ears. She shoved her enormous head into my chest, and my arms just barely reached around to scratch behind her ears obediently. And while it was thrilling, at the same time, an animal voice inside my head was saying There's a tiger's head in your chest! Her 6-inch fangs are a hair's breadth from your soft underbelly and vital organs!. It was a very humbling experience, to think all of us in that room were only still alive because of the good graces of this incredibly gorgeous, incredibly big and strong creature. 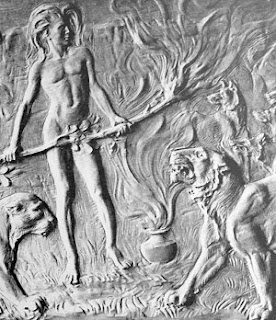 The ear scratching lasted a few minutes, and left me covered with burnt orange hairs my dogs were very, very interested in later on.

In honour of the brand new Year of the Tiger, here is a look at some great tiger action in film.

Tyger - Guilherme Marcondes (2006) an animated short in which a giant Tiger takes over a city, and inspired by William Blake's poem.

KAAL, The Wildest Tiger Movie Ever Made, a Bollywood film released in 2005 with magnificent beasts terrorizing gorgeous young actors.

Double Team - Mickey Rourke, Jean Claude Van Damme and a tiger, what more could you ask?

Shere Khan, the evil tiger from Rudyard Kipling's (Disneyfied) Jungle Book, 1967, with the voices of 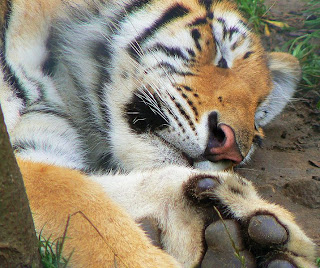 Sterling Holloway as Kaa and George Sanders as Shere Khan. (the engraving of Mowgli & Khan, above, is by Kipling's father, by the way, and was produced for one of the early editions of the Jungle Book, volumes 1 & 2)

There's that scene in Russell Crowe's Gladiator - but here's the real guy with the tiger, (Randy Miller, who's got the greatest job ever!)