In Bill Viola: The Eye of the Heart, a documentary directed by Mark Kidel in 2003, Bill relates a 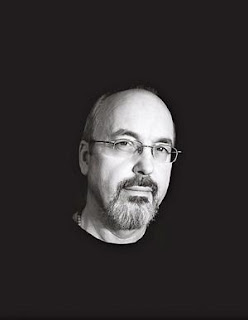 near drowning incident while on a family vacation in the mountains. He describes it as … the most beautiful world I’ve ever seen in my life, without fear, and peaceful. I only found the quote while looking into this post, but being familiar with his work, it came as no surprise. His love affair and intense fascination with water is a theme that pervades much of his body of work.

Bill Viola was born in 1951, and got an BFA from the College of Visual and Performing Arts at Syracuse University. He then took a detour into drumming for a rock band for four years or so, an experience he credits with fueling his growing interest in creating within an electronic medium. In fact, he and others went on to form the Composers Inside Electronics Group, touring the world in the early 1970's. He says the switch to video was a natural one.

I first became aware of his work in about 1998 I think, with pieces like The Messenger from 1986, and The Reflecting Pool (1977-79). Of course he's taken on different themes, but what really stands out in his work is how the obvious technical mastery of video - in various manipulations and elements like time-lapse, slow motion and reversals - only serves to create an impression, a movement and transformation that takes on multiple 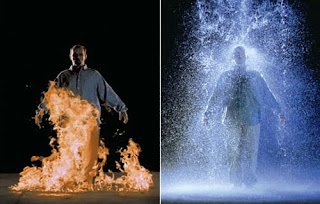 dimensions. The technology is in service of the art, in other words, and the effect is something spiritual, with universal themes.

One of the measures I use in looking at any creative work is, does it make me see something I wouldn't have otherwise - either by showing me something I've never seen before, or by showing me something incredible and new about something mundane? Of all the ways to die, I have to say drowning has always seemed among the least appealing, yet... in Bill Viola's work it's more like a transformation, a reabsorption into that most ubiquitous of elements. Beautiful, yes, but peaceful and welcoming is new territory for me.

I don't mean to suggest all his work looks at the same issues in the same way. 1983's Anthem is a a look at urban alienation, (among other things). In The Passions, a show that ran at the Getty Museum in 2003, along with other work, his main subject is the human being - human beings as modes of expression, however, not as mere objects.

You can read Bill's own thoughts on video in this 1969 articles from Art in America. Today Bill Viola is arguably the preeminent video artist of our time. A native of NYC, he now lives in Long Beach, California.

To close, a list of current exhibitions along with a video about Ocean Without a Shore, the piece he showed at the Venice Biennale in 2007.