Things must be pretty laidback in Iceland, I'm guessing. Partway through the second song of 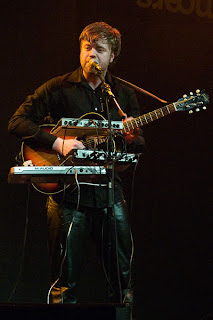 Mugison's hour long set last night at the Drake, the affable Icelander (?) mentioned it would be nice if his band members "...if they're here..." wouldn't mind coming up on stage to help out with the rest of the song. So they did, in an unhurried kind of way, bass and drums to complete the power rock trio and launch into songs like Jesus is a good name to moan (about prostitutes), the pathetic anthem, and others in a similar vein.

Mugison, or Örn Elías Guðmundsson as he was born, often plays solo, and when he's with a band it seems a revolving cast of characters than can swell to five members or more, but the power trio version we got was plenty enough to fill the Drake's little rock cave with sound. The place was full and appreciative, responding to his frequent requests for back up vocals and choruses by the very first song. He was polite in speech, screeching or gravelly voiced in songs that had echoes of Jimi Hendrix and Led Zep, (not to mention people like Queens of 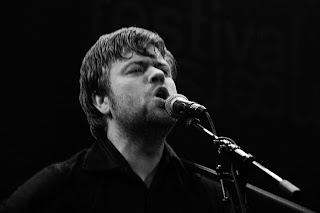 the Stone Age,) played with tight precision by the classic configuration, including "animal" drummer, and bassist who sang a weird "solo" composition that seemed like an inside joke. Knowing he was running out of time for any chance of an encore, he played his next to last song asking the crowd to "ask for one more after!"

At the end, the band gave out CDs, although he was also trying to sell 4 CD homemade box sets for $20 as well. They reminded me how well the bass-guitar-drums combination can work.