I'm So Close It's Not Even Funny - Opening Night 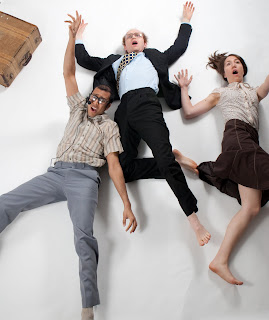 theatrical experience, a funny and kinetic whirl of theatre, modern dance (with some impressive moves!), projected images and dialogue. The dialogue comes face to face, over the phone, via Raj (Ravi Jain,) the Virtual Assistant in India, and smart phone text messaging, in a regression towards less and less real contact between husband Steve (Troels Hagen Findsen) and the wife played by Katrina Bugaj.

The husband/wife thread of the piece tells the tale of a well meaning businessman with a 'green' idea to make the world a better place and his patient but losing-her-mind wife left at home after the idea takes off and turns him into a jetsetting corporate type with little time for her. Interlaced with that story is one of an archeological find, a 5,000 year old grave in Italy where the two skeletons, male and female, are intertwined, forever locked in an embrace. Along the way come a few lessons in quantum physics, the Big Bang Theory and other tidbits - like the fact that, at some point in the future, for reasons too complicated to go into here, there will be a time when we'll still see a sky full of stars, but in fact they'll be long gone to farflung corners of the galaxy. For astronomers, the sky will be empty. 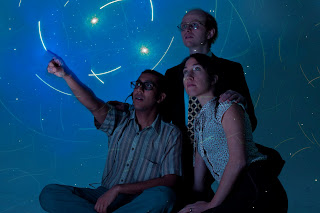 Steve's first day in the office becomes a literal whirlwind of repeated movements and officespeak refrains. The 'real' (physical) interaction between husband and wife becomes an ever tightening, ever more restricted circle of rote movements and phrases that eventually spin him away from her entirely.

The projected images (designed by Canadian Jamie Nesbitt) and spare staging worked well with a piece that relies on creating fleeting moments of performance and impression rather than extended scenes. The home environment is reduced to a bed, the one place that the pair both reconnect and part ways in increasingly shorter cycles.

It all works as an absorbing theatrical experience because of the combined energy of the three performers and expert assistance from Lighting Design by Gina Scherr (U.S.) and Sound Design by M.L Dogg (U.S.) It's deservedly gotten a lot of buzz since its premiere in 2008, with Arsinée Khanjian and husband Atom Egoyan among the crowd at last night's opening.
contemporary theatre ravi jain toronto theatre why not theatre