on March 17, 2010
I interviewed Aaron Lightstone of Toronto's Jaffa Road a few months ago, and they sent me an update recently. Congrats!

We are very excited to share this news with you, earlier today we attended the Juno Awards press conference.

Jaffa Road as been nominated for World Music Album of the Year for our début CD Sunplace..

World Music Album of the Year!

[Toronto ON] Canada's ambassadors of cutting-edge Diaspora Roots music, Jaffa Road, are nominated for a 2010 JUNO Award for their CD, "Sunplace":: World Music Album of the Year! 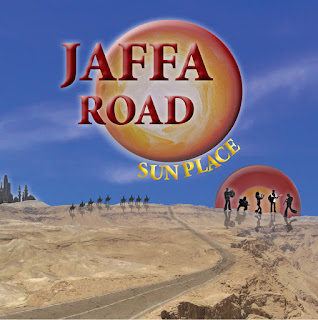 With electrifying onstage chemistry, Toronto's acclaimed Jaffa Road combines original and ancient poetry sung in Hebrew, Spanish and English with pulsating dub grooves, belly dance rhythms, ambient electronic textures, and exhilarating improvisations. The group has created a unique sonic landscape that draws easily and organically from the worlds of Jewish song, Classical Arabic and Indian music, modern jazz, rock, pop, and dub. In doing so, the group creates a union that is at once acoustic and electronic, secular and sacred, ancient and modern.

Sunplace, the band's debut disc, was released in 2009 to a packed house at The Lula Lounge in Toronto and was recorded for CBC's Canada Live. Enjoying wide airplay across the country, Jaffa Road's songs have won them Grand Prize in the John Lennon Song Writing contest (world music category) and runner-up status in the We are Listening Worlds of Music contest.

Jaffa Road is made up of some of Canada's most exciting and virtuosic interpreters of inter-cultural music: the textured stylings of founder and multi-instrumentalist/music therapist Aaron Lightstone (guitar, oud, saz, synthesizer), 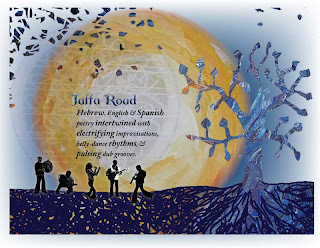 "Their music is incredibly diverse, rooted in centuries-old traditions yet with a keen eye to the

"If Toronto had to pick one group to reflect the world music scene in that city, well Jaffa Road would definitely be in the running as musical ambassadors."
CBC, Canada Live

"Their eclectic mix of world beat, jazz and electronica has a combination of cultural elements that is a virtual peace plan for the Middle East...great musicianship, odd ball combinations of instruments, drone, funk, verve and melody".
Distillery Jazz Festival