on March 30, 2010
From a press release about what sounds like a very cool show: 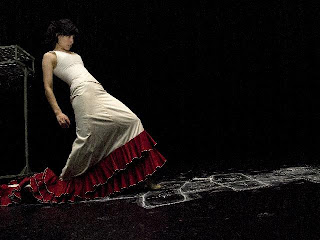 Infused with the spirit of Spain's Andalusia, the number 12 is the starting point for this piece, representing the beginning and the end, the universal concept of the relentless march of time. El12 is fraught with novelty and repetition, waiting and loss... the time we think we hold but that slips away.

El12 amalgamates and creates resonances and interferences between different temporal dimensions, from the 12-beat flamenco rhythm to the beat of the performance and the more 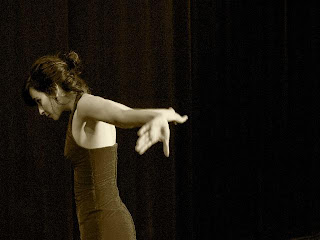 dreamlike rhythm of the video imagery. El12 weaves memory and hope, yesterday and tomorrow, and the will to live of bodies destined for oblivion into a visual tapestry that rushes 12 in 12 (12 beats, 12 hours, 12 months, 12 years) headlong toward the abyss.

La Otra Orilla was created in 2005 in Montreal by co-artistic directors Myriam Allard and Hedi "el Moro" Graja. Trained in traditional flamenco in Seville and Madrid, dancer/choreographer Myriam Allard began dancing professionally at the tablaos flamencos in Spain and Japan. She worked with such artists as Fani Fuster (Toulouse), Shawn Hounsell (Montreal) and Antonio Arrebolla (Seville) before founding La Otra Orilla in Montreal. Director/singer Hedi "el Moro" Graja is a self-taught flamenco singer. He became interested in the art form while studying classical voice at the Conservatoire National Régional de Toulouse, and spent four years in Andalusia perfecting his craft.

La Otra Orilla's repertoire includes Declaración en idioma flamenco, which performed to sold-out houses in Quebec City and Montreal in February 2006, and Denominacón de Origen Descontrolado, a public and critical success that toured the province during the 2007-2009 seasons. Their following show, MuE_s, was warmly received at the Montréal en Lumières Festival in 2008.

Rooted in tradition yet projected in a current mode of expression, the flamenco of La Otra Orilla both exemplifies and champions the timeless and universal values embodied in this Andalusian art form.

Of a previous performance, La Presse has said: We are left totally stunned, jolted by the magnetic energy that heats up the stage and theatreŠ magical moments, which won't be repeated anytime soon. La Otra Orilla is a name to remember.

El12 premieres as part of the Danse Danse in Montreal from March 30-April 17, and will tour to Sherbrooke, Quebec on April 20 and Trois-Rivières, Quebec on May 1.