A Taste of Iceland - Art, Film & Food come to Toronto

There are only 300,000 people in Iceland, did you know that? And yet, there seems to be an abundance of arts and culture in the island country that sits in the cold seas between the coasts 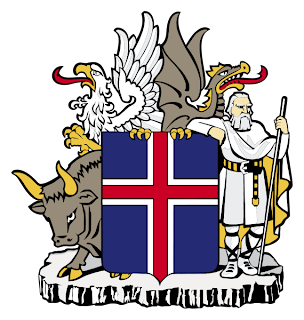 of Norway and the U.K., and Greenland. They're bringing a little of that culture to Toronto this month (after a stop in Boston March 11-17) - a taste of it, if you will - in conjunction with the Drake Hotel. The Drake will have a special menu and will exhibit Icelandic art, and I'll be trying to get to the Underground for Mugison on the 19th or 20th. (Image is of the coat of arms of Iceland.)

In the meantime, you can also check out two films in FREE screenings:

I just checked them out myself - here's a quick look: 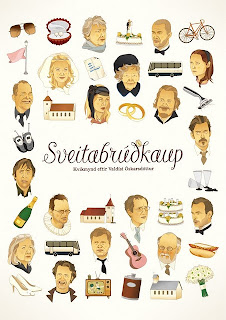 Valdís Óskarsdóttir is a well known editor who has worked on the films of Gus Van Sant, Michel Gondry, and Lars von Trier, among others, and Country Wedding is her directorial début. The film itself poses a fairly simple story - a young couple wants to get married in the country. They, their families and guests, board two buses and head out of Reykjavik for the treeless Icelandic countryside for what is to be a couple of hours' journey to a charming church in the bucolic grassy hills and fields... But as any filmgoer knows, such journeys are never that simple.

Interestingly, Óskarsdóttir chose to "write" the script à la Mike Leigh - she only gave her actors a character outline. They were then asked to come up with their own back stories, and a minimum of one secret that they might or might not choose to reveal during the filming. Rehearsals consisted only of those back story events - things that would have happened before the events that take place on screen, and the actual filming was accomplished in a mere 7 days, (in part, Óskarsdóttir says, to keep it on the cheap.)

Naturally, they get lost. The result is a comedic road flick, with the two half empty buses full of would be wedding guests lurching about the Icelandic countryside - either beautiful or starkly 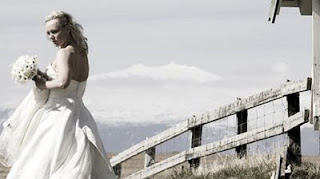 ugly, as debated by the characters in the film - and two families that disintegrate into a Kafkaesque maelstrom of confessions, revelations and fights both cat and otherwise. There's a granny suffering from dementia who wanders off, the weepy bride to be, a bickering gay couple, the not-so-closet drunk and more as the two families communicate via cell phones from the two buses and the situation spirals out of control. This is the family unvarnished, no glossy sentimentality here - not even of the poetic landscape. As someone points out, it's an island - you can't get away - the film is coloured with Scandinavian fatalism, if I may call it that. You may find yourself disliking most or all of the characters, but I think that's the point. The humour is definitely on point, and interestingly, the hapless engaged couple are pretty much the only ones left standing by the end of it.

Óskarsdóttir's editing background is in evidence as she keeps us interested in what is essentially a bunch of talking heads in a bus, contrasted by the beauty of the sparsely populated Icelandic countryside that's almost a character in itself. The film screened at TIFF in 2008, along with the Chicago International Film Festival, London Film Festival and more.

Check out the trailer here - the film will be subtitled in English for the screening, of course. 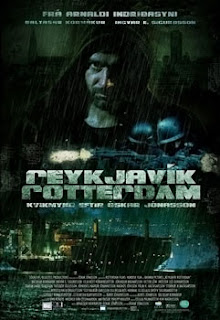 Reykjavik-Rotterdam is a taut, expertly paced thriller that will keep you guessing as to its resolution right up to the end. In the first scene, we see some kind of shady deal going wrong, with a violent end for one of the conspirators. Arnór, the one left standing - or running away, as it were - high tails it to his brother's place. Kristófer, older brother and security guard, is reluctant to get involved, having gone straight. But Kristófer has financial problems of his own, including two months' unpaid rent, and a "friend" who suggests that one last big job to end all jobs...

If you're Icelandic, or even European, you'd "get" what's happening right away, in fact the film's title probably says it all. Those of us not so familiar with the geography of that region of the North Atlantic may take a little longer to cotton on to the implications - island = scarcity of resources = ultra expensive booze = smuggling - but you'll get caught up in the action nonetheless. The setting is integral to the plot.

Kristófer takes a job on a ship, where apparently smuggling is pretty much de rigueur, the crew finding odd spaces and areas ont he ship where they can effectively slip through the cracks of inspection. Jónasson is a great storyteller, revealing bits as the film progresses. It effectively builds up a feeling of impending doom on several fronts - the ship, where Kristófer runs afoul of a 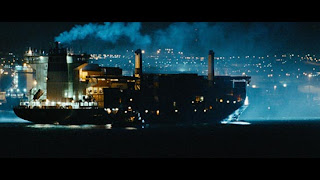 suspicious captain, at home where wife Íris and their two children are confronted by thugs, and Kristófer's growing realization of just what he's done by leaving his pretty wife at home alone with Steingrímur, just incidentally the guy who set up this last job.

It has an unglamourized, indie feel to it that's very realistic. These are working class criminals, not the high living sort, people whose precarious finances are what keeps them in a dangerous game. We feel the tedium of their criminal work as they measure and repackage the drugs that come into their possession in just one of the many plot twists. Things fit together piece by piece to and ending that is, like Country Wedding, a victory for a couple in love - but not necessarily for law and order.

The film screened at the Palm Springs International Film Festival and Rotterdam Film Festival, both in 2010. An English language version is planned by Working Title Films, reportedly with Mark Wahlberg in the role of Kristófer the security guard. Interestingly, the Hollywoodized version will be directed by its original star (and also producer) - Baltasar Kormákur - at least, that's what's being proposed (according to the Hollywood Reporter).