On the occasion of a recent concert at New York City's Highline Ballroom on February 19, The Village Voice mused about the differences between West Coast based Fools Gold, white 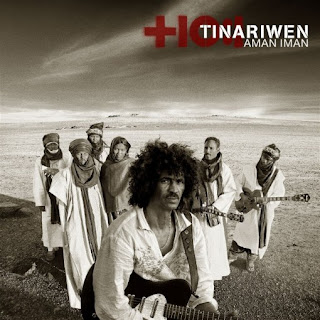 American kids who play African inspired music, (not to put too fine a point on it,) and Tinariwen, the legendary guitar driven band from the Sahara, whose members initially met in a Libyan refugee camp, and whose latest album was recorded in a studio run only by a generator. The world of pop music, so they say, has gone looking for "authenticity" that it can't find in itself (quel surprise!) and come up with African aspirations. Without dissing Fools Gold, (who were opening for Tinariwen,) Vampire Weekend and their like - I love the music too, and if I were a musician, I'd want to play it - I think if it's authenticity you're after, then the difference is clear.

The members of Tinariwen are Tuaregs, the semi-nomadic Kel Tamashek of the Sahara region of northern Mali. They are led by the charismatic Ibrahim Ag Alhabib, who ran away from home at the age of 9, as legend has it. He grew up in the refugee camps of Algeria and Libya, meeting the people along the way who would come together in the late 1970's as the band - the 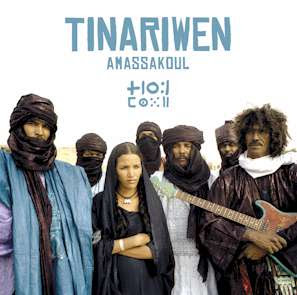 band who wrote the songs of the Tuareg revolution that was going on at the time, for the MPA, or Mouvement Populaire de l'Azawad. They recorded in a makeshift "field studio" and distributed their cassettes via word of mouth.

After a stint of military action, Tinariwen went back to devoting themselves to the bluesy guitar meets desert music that would gradually conquer the world on its own terms, becoming arguably the most successful African group ever, and earning fans like Brian Eno and Robert Plant. Their songs still tell of the struggles of their people, and the beauty of the desert.

Canadian audiences may be more familiar with throat singing than most, having international stars of the artform like Tanya Tagaq in our midst. Interestingly, the Tuvan version played by Huun Huur Tu (Tuva being a sparsely setted region north of Mongolia in the former Soviet Union,) is traditionally only sung by men. The evocative songs are hypnotic and based on the 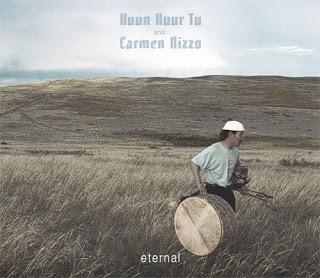 Previous collaborations have included Ry Cooder (for the soundtrack of the film Geronimo) and The Kronos Quartet. This time around, they've chosen two time Grammy Nominee, electronic musician/producer/mixer/remixer/musician and co-writer Carmen Rizzo. Rizzo, who's worked with the likes of Seal, Coldplay, Alanis Morissette, Paul Oakenfold, BT, Tiesto, Jem, Esthero, Ryuichi Sakamoto, Cirque du Soleil, KD Lang, and Pete Townshend, among others, added his electronica touch to their latest CD, Eternal. It's a true meeting of cultures like no other.

They all come to Toronto later this week in a unique opportunity for music lovers.

TINARIWEN live at The Phoenix Concert Theatre
Thursday, March 4, 9PM
$30 in advance / $40 at the door