Water on the Table - A documentary about Maude Barlow

on March 15, 2010
Water on the Table
A documentary about Maude Barlow and Water Justice
Written, directed and produced by Liz Marshall
Produced in association with TVO

Is water a human right or a commodity to bought and sold like oil or sugar? That's the essential philosphical war that is currently being waged at an international level. Water on the Table 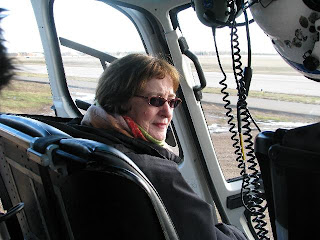 tackles that question through taking a look at Canada's international "Water Warrior" Maude Barlow in her tireless quest to give water the status that will forever protect it from commercial enterprise, and something that can never be denied anyone. (Image is of Maude at the Alberta Tar Sands.)

Maude's view of the not too distant future is a scary one - only the rich will be able to afford to drink the purest bottled water that will originate from ever dwindling uncontaminated natural sources. The rest of us will be drinking recycled sewer water. Companies will be cleaning up sewage and selling it back to us at a profit. The poor and have-not countries... well no one really says outright what will happen to them.

The idea is a strong one and the debates compelling, but does it make good cinema? The answer is yes. Water on the Table is filmmaker Liz Marshall's first feature length documentary, but it nonetheless follows in a growing body of work that focuses on talking about issues with an artistic 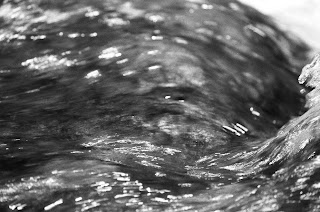 vision. The film follows Maude on Canada-wide and international junkets, speaking to crowds, politely disrupting political meetings, doing work for the UN, where she served as Senior Advisor on Water to the 63rd President of the United Nations General Assembly (that's the full title) in 2008/2009. This is a woman whose polite demeanour masks an iron determination, who confronts politicians and security personnel in a measured voice, a proper grandmother who wears pearls and just the right shade of lipstick as she talks about revolutionary politics.

The scenes of Barlow are intercut with a visual meditation on the very essence and mercurial beauty of water. "I needed the right cinematographer," says Marshall about Steve Cosens (at work in the image below). It's shot as a poetic ode to the element, making its beauty the real subject of 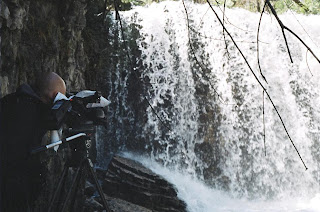 the film. Almost all the shots include water in some way, to emphasize its ubiquitous nature on our lives. "It was really important to me to create that poetic thread."

The film's just been released and will premiere on March 24, but the project's origins go back several years. "It goes back to 2002, when I was working as a producer for BookTV," Liz says. The book Blue Gold, written by Barlow and Tony Clarke, came across her desk one day, and left her impressed. "I was impacted by it," Liz says.

Busy with other projects for a few years, she came back to it in earnest in 2006, when she found Maude's email in her archives, and began to go after funding. It wasn't an easy project to get underway. "You really have to, as an independent filmmaker, have that undying belief that it will 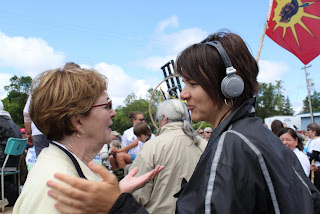 happen," she says. "It took me over a year to get the first green light as far as funding."

At the same time, a number of other films and documentaries appeared on the subject, like 2007's Flow. "The market was flooded with water documentaries," she jokes. In contrast, Water on the Table is character driven, distinguished by the unflappable personality of Maude Barlow, and focuses mainly on Canada and its relationship to the U.S.

While her rapport with her subject is obvious - "I just clicked with her," Liz says - the film does give a voice to the opposing position in characters who are also strong, like the Financial Post's Terence Corcoran.

It juxtaposes the ideological chasm. Part of the reason why Maude's opponents are dismissive is her insistence on adding a spiritual dimension to the debate, on making it a moral issue. She believes that all life has a right to water, that the planet itself has a right to its water. That no life can exist on this planet without water is a matter of fact and not belief - and if we value life, how can we not regard that which sustains it as sacred? But, we buy up and sell everything else, the argument goes, why not water too?

If you're not convinced this is a real or immediate issue, there's a dispute currently before NAFTA regarding a claim filed by a California company called Sun Belt Water, who make the argument that Canada has an abundance of water that they should be able to access for their drought plagued SoCal region.

Check out the details here