who knew grannie: a dub aria by ahdri zhina mandiela

I can actually say, without a trace of irony, that one of my best friends is a dub poet, but if you're not familiar, it's a form of performance poetry whose underlying music is the rhythm of 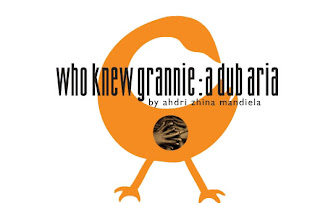 reggae. Dub poetry can be performed either with or without the actual music; a 'dub aria' goes one step further and replaces the reggae music with human voices and percussion.

Obsidian Theatre Company's Artistic Director Philip Akin (director of Factory Theatre's Toronto the Good in 2009 and the current remount of Intimate Apparel by Obsidian/Canadian Stage) elaborates, "What we have is a new art form that creates lyricism and music through language and chorale work. And yet this aria form is very accessible and understandable. Repetition and clarity of thought allows any audience to easily follow the story and be surrounded by the rich imagery."

The play follows several characters through one melodic voice that bounces from one to the other to many and back again seamlessly. ahdri has been developing dub in a theatrical context 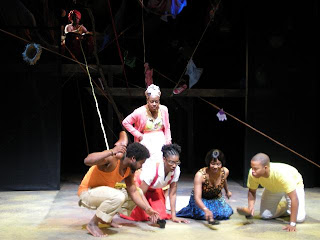 since the early 1990's, and her deft hand shows in a seamless flow of words and actions on stage (from the snippets I saw at a media preview) - no mean feat for either dramaturge or performers. The play combines children's games with dub poetry, elements of opera and more in the story of four cousins who go back to their childhood home of Jamaica for the funeral of the grandmother who raised them all.

The script is aided by a dimensional set that's kind've an abstracted back alley in Jamaica, with lines that run from floor to ceiling, some more horizontal and strewn with laundry. The musician, Amina Alfred, drums from above the floor in a two level treehouse where the laundry and lines cluster. Warm yellow lights and sunny costuming evoke a more tropical atmosphere than Toronto in March (although it was a damn fine day today - 15 Celsius!)

I'll be at the opening in a couple of days - review to come.

Cast:
Miranda Edwards (Toronto the Good, The Madonna Painter) as likklebit, Ordena (The Real McCoy; da kink in my hair; Adventures of a Black Girl in Search of God) as grannie, Joseph Jomo Pierre (Born Ready; Pusha-Man; HipHop Who Stole the Show) as tyetye, Andrea Scott (For Colored Girls who have Considered Suicide When the Rainbow is Enuf; Omnium Gatherum; Kindness) as vilma and Marcel Stewart (Toronto the Good; Theatre of the Film Noir; MacBeth) as kris.
Joining them is musician Amina Alfred (blood.claat;„da kink in my hair; Capturing Freedom) representing the sankofa bird.
Julia Tribe is the Set & Costume Designer
Bonnie Beecher is the Lighting Designer
Shauna Japp is the Stage Manager
Neha Ross is the Apprentice Stage Manager
mandiela's Assistant Director is Jajube Mandiela