who knew grannie: a dub aria by ahdri zhina mandiela 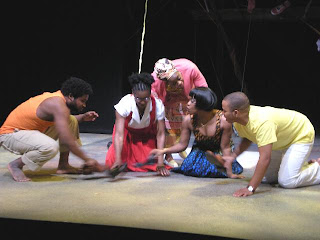 who knew grannie.. is a creative and engaging piece of theatre by playwright/ director ahdri zhina mandiela. It has a rhythm that ebbs and flows with the music of dub poetry in beautiful language that echoes the up and down movements of energy and intensity. There were layers and elements of movement, dance, song, and the drumming and other music by Amina Alfred to add to the mix.

There is a story, and its basic outlines are fairly straightforward - four cousins are returning to Jamaica for the funeral of the grannie who raised them. As such occasions do, it sparks a flood of memory, feelings of regret and loss. The piece flows from past to present to thought to action in scenes that contrast their solitary lives in farflung locales with the shared memories of childhood. 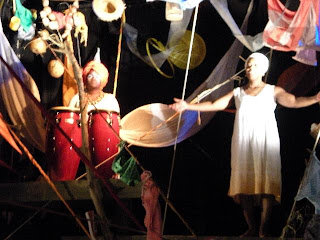 You could see the passion the actors had for the material, and both humour and pathos seemed genuine.

The stories of the cousins, as children and grown up, unfold in bits in those memories and children's games. Your mother was a good woman - your mother was a kind woman - like me! It becomes a refrain that grannie (Ordena) sings to young tyetye (Joseph Jomos Pierre), as an adult the underachiever of the four, sitting in jail on some minor offense - as a the child only too eager to believe something good of the mother who disappeared from his life.

Set and costumes by Julia Tribe, along with 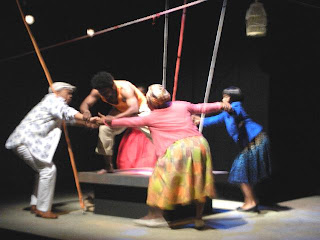 lighting by Bonnie Beecher, create a warm glow on stage with splashes of the colour that's so absent from this area of North America this time of year. It evokes both a more tropical climate and the hazy warmth of childhood memory itself.

Opening night looked full or nearly so, with a responsive crowd that gave the cast a standing ovation. Perhaps it's not incidental that this is the third or fourth theatrical piece I've seen this year that has the strength of family as its core theme..?