William Kentridge: Five Themes is a large scale exhibition of the internationally acclaimed artist's work, devoted to examining nearly 30 years of his oeuvre. The show includes over 120 works in ten media, with nearly half drawn from MoMA's existing collection of Kentridge's installations, 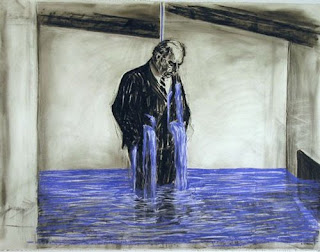 films, drawings, and prints. A true "multimedia" artist, his works include prints, collage, books, sculpture and more, but he's probably best known for his charcoal drawings and the animated films based on them. He's often said in interviews that he simply begins with a concept, often with no idea which medium (or media) he'll use to express it in the end. Many of his animations are created by drawing and erasing and redrawing on the same sheet of paper - a method he describes as "stone age animation" - leaving the ghost impression of previous drawings to add to the new. The show is striking, often dark, often political, and leans to the expressionistic in style. (Drawing from Stereoscope 1998–99)

It may not always be immediately obvious in his pieces, but it does help in understanding his 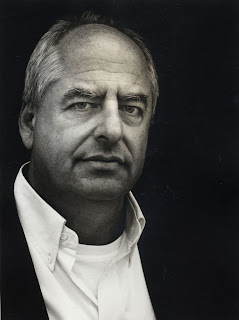 work to know that artist William Kentridge is South African. While his pieces don't typically look at the former apartheid régime directly in its subject matter, they do deal with the raw psychological aftermath of the oppressive system on South African society.

“I have never been able to escape Johannesburg, and in the end, all my work is rooted in this rather desperate provincial city. I have never tried to make illustrations of apartheid, but the drawings and the films are certainly spawned by, and feed off, the brutalised society left in its wake.” (Quotation from William Kentridge by Carolyn Christov-Bakargiev (1998), Societé des Expositions du Palais de Beaux-Arts de Bruxelles.)

In an introductory note to Felix In Exile, Kentridge writes, "In the same way that there is a human act of dismembering the past there is a natural process in the terrain through erosion, growth, dilapidation that also seeks to blot out events. In South Africa this process has other dimensions. The very term 'new South Africa' has within it the idea of a painting over the old, the natural process of dismembering, the naturalization of things new."

The show at MoMA featured a sold out performance of I am not me, the horse is not mine on March 4, a remount of his solo performance piece that combines narration, video, and a vocal and 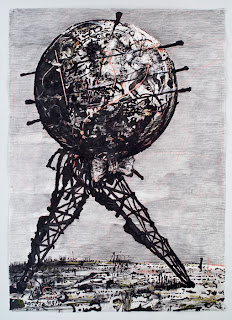 instrumental soundtrack. It was originally performed at the Sydney Biennale in 2008, and is based on an absurdist story by Russian Nikolai Gogol. The short story, The Nose (1837) follows the trials and tribulations of a Russian bureaucrat who wakes up one day to find his nose has escaped his face. The Nose is also an opera by Dimitri Shostakovich, and Kentridge designed the production currently on view at the Metropolitan Opera. “The opera is about the terrors of hierarchy,” Kentridge says in the programme notes. “There’s a mixture of anarchy and the absurd that interests me. I love in this opera the sense that anything is possible.” Check out a preview, with animations by Kentridge, here. His involvement in the stage has included acting, writing, and designing productions primarily in his native South Africa. (Image - right - Drawing for II Sole 24 Ore [World Walking], 2007).

Having worked with so many artists over the years, I'm always impressed by someone who can take the simplest of media and use it to great effect, as he does with simply charcoal and paper. Drawing is an art that's not properly appreciated in this digital age, and Kentridge's work shows its still visceral, expressive power and life. The show a MoMA is the fourth stop on a world tour that began at the San Francisco Museum of Modern Art, and will continue on to Paris, Vienna and Jerusalem before a final stop at the Stedelijk Museum, Amsterdam in the summer of 2011.

Check out an interactive version of the exhibition here.