The film American Splendor screened at the Toronto Jewish Film Festival with none other than Harvey Pekar to give opening remarks and a Q&A after the film. He was rather 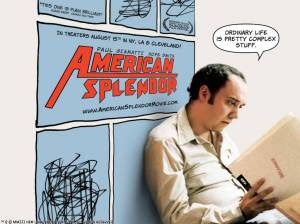 grandly described as a pivotal figure in the history of comics, the first to popularize the autobiographical illustrated novel, namely American Splendor, written about his own life as a file clerk at the V.A. Hospital in Cleveland.

It was a notion the irascible cartoon artist hastened to dispell. "I'm not used to this kind of star treatment," he said. He reminisced about his introduction to comics, and their typical superhero world. "If you wanna call that Superman, you can call me Schlepperman." When it came to the film that chronicles his life, he was equally candid. "This movie really saved me." As he confided, he found that couldn't retire on his earnings as a lifelong file clerk - he never went for promotions because he loved the job where he didn't really do very much. "And my comic books don't sell that much," he added.

After having seen him in the Comic Forum the day before, I'd have to say it was Harvey at his most genial. "If you want to come down to Cleveland, I'm in the phonebook - give me a ring." It sounded like a genuine invitation.

Then it was on to the film. It's partly narrated by the real Harvey Pekar and featuring his real

life wife Joyce Brabner, partly acted out by Paul Giammati and Hope Davis as same, with a scene or two where we see the film being made, the cameras behind Paul, and in one scene, Paul as Harvey watches as a third actor and actress act out their/his lives. It keeps the narrative tripping along.

"Ordinary life is pretty complex stuff." It's Harvey's mantra of sorts, and an explanation of why he writes what he writes. As much as he's uncompromising in some ways, the humour softens the blows. On looking at himself in the mirror: "Now there's a reliable disappointment."

The film begins just as his second wife is leaving him. Some lonely time later, Joyce, then a young and budding/failing comicbook store owner, strikes up a written correspondence with the artist whose work she loves. One thing leads to another and they decide to meet.

It's a match made in heaven. Right off, at their first meeting, he announces his vasectomized status before anything else - Joyce seems nonplussed.

Harvey admits to marrying quickly all 3 times to the only women who'd have him (his words!) For whatever reason, it's a schedule Joyce was in synch with. This also on the first date:

"I think we should just skip the whole courtship thing and get married."

Naturally, even after he hooks up with Robert Crumb barely out of his teens and gets him to illustrate his first comics, and even after he marries the love of his life, things don't seem to get much better - certainly not his mood. "I'm just a gloomy guy, that's all." He still has to work as a file clerk as the riches fail to come in.

Eventually, as history tells us and many will remember, the David Letterman Show got wind of his grassroots appeal, and had him on. The infamously irritable Harvey balked at Letterman's slick questions and assumptions (he bristled when asked why he didn't quit his day job!) but the fractitious repartee seemed to suit the audience. Even though he was aware that he was largely playing Letterman's chump, he thought it good for business, so to speak, and so the appearances continued. 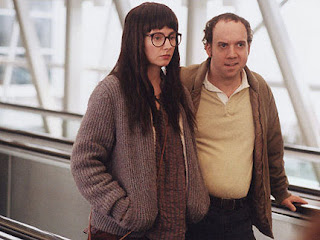 He did, that is, until one fateful appearance at a time when Joyce had been away saving children in Palestine, and he'd just found an ominous lump in the nether regions of his body. At the same time, he'd concluded that he was serving perverted corporate interests by appearing on the talk show. The result is an episode that went down in history.

Despite his resident gloom, however, it's clear that his life came alive when he began producing his comics, and he met virtually all the important people in his life because of it, including Joyce and their foster daughter, a brainy blonde little girl brought around by one of the artists he worked with. That's the thread of hope that keeps the story - and him, I would imagine - alive.

The latter part of the film deals with his struggle with cancer. It was Joyce's suggestion to turn the ordeal into something positive by making a comic out of it, a book that won them both recognition and awards.

"With any luck I'll get a window of good health between retirement and when I die." It's his semi-hopeful wish.

Paul Giamatti, one of my favourite actors, inhabits the role completely, from his posture, his voice and words, gestures and movements. It's a really interesting film about a true iconoclast.
american splendor Harvey Pekar independent film Jewish cinema toronto jewish film festival