There's no doubt that Oshawa filmmaker Stephanie Boyd has her heart in the right place with The Devil Operation. In it, she traces a conflict between the mostly indigenous and impoverished farmers in the Andean regions of Peru and the gold mining companies - and their 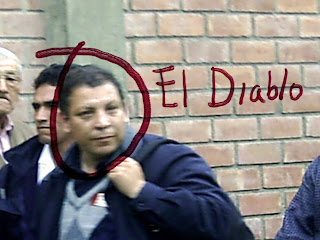 goons - who look at the land only as the storehouse of their future wealth.

The early parts of the film focus on one Father Marco Arana, a simple parish priest in one of the country's poorest regions. He stands up for the people as they organize against the gold mining conglomerate that's attempting to explore and then mine the mountain that looms above them. Father Marco, named a "Hero of the Environment" by Time Magazine in 2009, tries to keep his parishioners safe by keeping order and trying to face the onslaught of commercial interests with civil disobedience but not violence. At stake is the land and the life giving water that flows down from the top, water that will be contaminated by the machinations of the conglomerate at the Yanacocha Mine.

The people organize a blockade of the only road leading uphill, one that's so successful in bringing the mining exploration to a halt that eventually, the government caves in and rescinds the company's mining permit. A victory - but not so fast. All of a sudden strangers are seen in town, taking pictures and following Father Arana and his activist group, called the Grufides. Paranoia runs high, and justifiably so. A nearby veterinarian, also instrumental in organizing the local farm people, is shot at point blank range in front of witnesses. Who are the perpetrators, and who sent them to terrorize and intimidate?

It's a compelling story, and the footage that focuses on the group, its struggles and its testimonials is the strongest. The problem with the film itself is none other than Stephanie Boyd, whose mannered voiceover occasionally interjects to explain how evil the company is, just in case we didn't get the point. The narration shouldn't stand out over the evidence of the film.

The film also loses focus about two thirds of the way through. To ostensibly illustrate the level of fear and apprehension of the activists, it goes into a long section that has nothing to do with 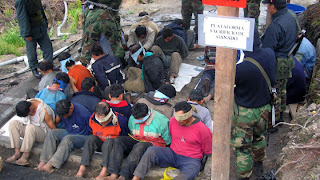 Father Arana. It's another good story with riveting evidence of corporate abuses, but here it's tacked onto another narrative, it keeps making the same point over and over. The promo material describes it as a "real life political thriller", but we're simply told about the various bits of evidence that link together - some of them flimsiliy - in a tone that has already set the conflict in stark black and white. Investigative journalism it certainly is not.

It's not that I didn't believe the story or doubt what was being presented, but it doesn't build a coherent case in and of itself. The title of the film refers to the fact that the company's operatives gave all their surveillance subjects codenames. Father Arana's was "the Devil". However, that part of the story only takes up about a third of the film. What it lacks is a solid focus, one that should rest with the good Father and his cohorts. No amount of smug voiceover can match the poignancy of his words.

If we don't risk our lives to protect life, what sense is there in living?

The verdict is - worth viewing even if it was only to inform yourself about the Andean people and their poetically beautiful countryside, and the surreal struggle they find themselves embroiled in. You become absorbed by their story as you see it in the film.