on April 25, 2010
Fritz the Cat (1972)
Produced by Steve Krantz
Written & Directed by Ralph Bakshi.
With Skip Hinnant, Rosetta LeNoire, John McCurry
Based on the comic books by Robert Crumb
Midnight screening as part of the Toronto Jewish Film Festival

There was a wide range of films at this year's Jewish Film Fest, including important documentaries, dramas, and the 2009 restoration of 1948's Nuremberg: Its Lesson for 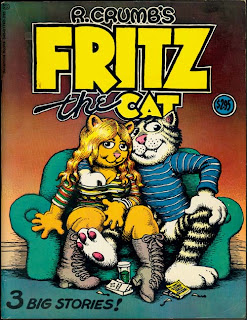 Today. So naturally, I chose to end my TJFF experience with... Fritz the Cat.

Fritz the Cat was the first X-rated animation feature, (I clearly remember the big stir when it came out - as a mere child of course,) and was for a time the highest grossing animated movie of all time, raking in a cool $100 million. Written and directed by Israeli born Ralph Bakshi, it follows the adventures of callow Fritz the Cat, a character developed by comic book luminary Robert Crumb. More about that later - first the film.

It was made in 1972, after all, and it's a film supposedly about the 1960's, so you can take a few things for granted:
Fritz is a young ne'er-do-well going to NYU until, in a fit of pique when all his friends are hard at work studying for exams, he burns his books and papers. "I'm a writer and a poet!" he declares. "It is my duty to get out there and dig the world!" Ah, the 60's.

Thus begins an adventure into... well, a series of convoluted adventures, drug binges, and 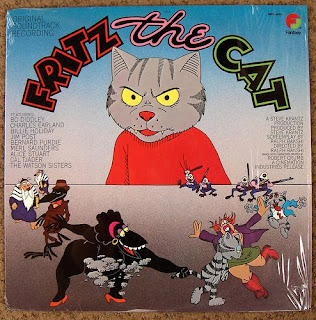 encounters with things like dancing Rabbis, Harlem (the black people played by magpies - subtle, this film is not,) a rat who looks like Henry Kissinger, Nazi biker mice and much, much more. He goes on a road trip across the country and comes across crazy, violent revolutionaries (played mostly by lizards,) with a burst of violence, including a gang rape, towards an ending that brings him home to the three girlfriends he left behind.

Robert Crumb, Fritz's creator, has publicly stated his distaste for much of the script, including Bakshi's ramped up violence. He also had a problem with the Fritz's anti-leftwing rant near the end. The feeling, it seems, was mutual, with Bakshi declaring his dislike for Crumb, (as quoted in a 2008 biography by John Bigson and Chris McDonnell). Crumb actually bumped Fritz off in a comic that came out after the film, having him killed by an ex-girlfriend. The same producer went on to make The Nine Lives of Fritz the Cat in 1974 without either Crumb or Bakshi's help.

But despite the unfortunate hubbub, it's an eye popping trip back in time.
animated film fritz the cat ralph bakshi robert crumb toronto jewish film festival