A Jew Grows in Brooklyn - Coming to Toronto

"I'm very happy to be back in Canada - just in time for the Olympics," quips Jake Ehrenreich, writer and performer of the hit one man play A Jew Grows in Brooklyn. After a run of well over a 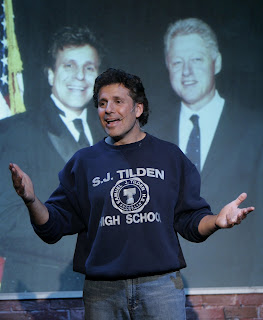 year at New York's venerable Lamb's Theatre (and breaking some box office records in the process,) the well reviewed show will be hitting Toronto later this month. "I drove from New York last night - took me 7 hours," he claimed to laughs (from those of us that have ever driven that torturous 10 hour route) at a recent media event.

Billed as "a rock'n roll true story, Holocaust family, Borscht Belt comic musical", Jake's autobiographical show clearly has a Jewish theme, yet he describes issues and ideas that can be appreciated on a universal level. "I wrote the show about my journey of self discovery. I wanted to be anything but like my parents." Amen to that.

The Holocaust cast its insidious shadow into Jake's life as a child, resulting in an overriding desire to create an identity for himself that was American above all. "I needed American credentials to offset the fact that my parents were immigrants," he says. Baseball was one of his solutions. "It was as American as applepie, and that's what I wanted to be." In the show, he describes getting his father, an intellectual man, to watch his first game of baseball with his son when Jake was 9, in 1965. His father's response? "What kind of game is this baseball? Two people play and eight people watch!"

Despite its potentially darker themes, including the early onset Alzheimer's that struck his mother and both sisters, the baseball line is typical of the upbeat mood of the show - it's 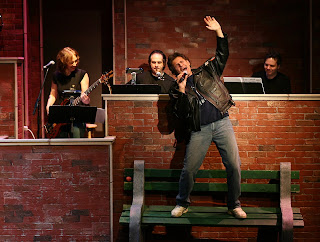 necessary to find hope to move on. Another aspect of his all-American identity was a career in music as a professional drummer. He toured the world with the Beatlemania show as Ringo, among other gigs. "I almost got the gig to play with KISS when Peter Criss left," he says (the 1979 leaving, I'm presuming). He gets out the drums for a rousing solo during the show.

Part song and dance, with the music coming from several eras in English and Yiddish, part storytelling, part stand up comedy, it features a re-creation of the golden era of Catskills Borscht Belt entertainment, among many other scenes.

Being a personal story, Jake says the most rewarding responses come from people who come up to him after the show and simply want to tell him about their own experiences. Publishers of the original Chicken Soup series of books approached Jake after one of his shows with a proposal - to write a book based on his story, but specifically incorporating some of the life lessons he'd learned along the way, à la Chicken Soup of course. It was a match made in heaven. "Part of my mission is really to heal the world," Jake admits. You can check out an excerpt here and order it here.