The gentleman who introduced the film told the audience Mensch is a French caper film about a Jewish safecracker, and that pretty much sums up the plot. Sam is a good looking 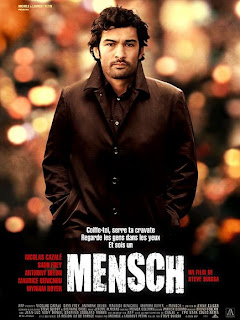 guy from a 'good' family in the produce business who gets off on living a life of crime.

It begins with a chase gone wrong and a young man dead, the explanation of which contains the twist in the story. Otherwise, the outlines of the story are familiar - the 30 something career criminal with a son who keeps getting drawn farther and farther into the big job to end all big jobs. The guy who supposedly wants out.

The film is shot in Euro-style realism in that not everyone is model good looking, (although Sam sure is easy on the eyes,) a sense of reality that extends to a script that portrays the drudgery of crime, those long hours of planning and sometimes risky fact finding that come before the electrifying moment of truth.

Sam is in love with an African-French woman, a reporter who naturally ferrets out the truth about him. If the story holds few surprises, that's compensated in the most part by the depth of the characters, even as we come to ever so slightly dislike the glib way Sam lies his way back and forth between the straight and criminal elements of his life. His young son is already a budding extortionist, disturbingly like his father in his easy justifications for what he's done.

Naturally, the two threads of his life start to intersect with increasingly ominous consequences. His son finds a gun tucked in the backseat of his buddy's car, and he has to get him to leave the room when another associate wants to snort coke on the coffee table. He's not an entirely likable character. Without giving too much away, let's just say that, in the end I was - like his girlfriend - unconvinced of his Mensch-ness.
French cinema Jewish cinema mensch toronto jewish film festival