Rembrandt/Freud: Etchings from Life at the AGO

on April 05, 2010
Rembrandt/Freud: Etchings from Life
at the Art Gallery of Ontario to May 23 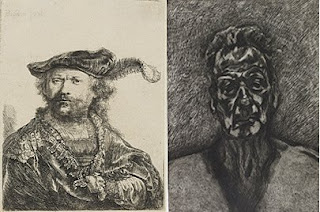 juxtaposed in this show, both renowned not only for painting and drawing, but for etching, a printing process. The AGO's notes for the exhibition call it a 'visual conversation', and that's an apt term for the thoughts that bounced through my head while walking through it.

Rembrandt hast the most bizarre etching technique of certain squibbles and little scratches and irregular, isolated strokes. The result is a deep and powerful effect of light and dark. - Filippo Baldinucci, Italian art historian, 1686

With etching there's an element of danger and mystery. You don't know how it's going to come out. What's black is whtie. What's left is right. - Lucian Freud, 2007

The quotes are painted on the walls of the initial room of the show. Etching, so they tell me, was a relatively new art in Rembrandt's day, and he takes it to amazing levels of - as Baldinucci notes - 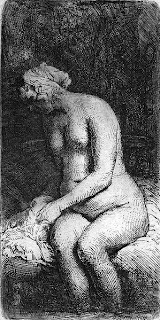 shadow and light. In etching, a metal plate is covered with a waxy substance. The image is scratched into the wax, exposing the metal. An acid is then poured onto the exposed areas, cutting into the metal, which becomes a print plate. I can certainly understand Freud's 'danger and mystery'!

It's the dramatic effect of the light, not so much the shadow, that I noticed in all of Rembrandt's pieces. It bathed at least some area of the composition, even in darker works like the portrait of his mother. His etchings have a soft kind of texture, the forms are rounded, the lines numerous and expressive, and you get the feel of light and space.

Freud's human figures are more stylized, the line quality sharper edged, with fewer but stronger strokes. In his I was struck by the creases in everything, the shadows. Still three dimensional, nevertheless they felt somehow flattened, existing in a reduced plane. Is it the difference between the certainty of the Renaissance and the angst of the modern world? (Nackte Frau im Freien, mit den Füßen im Wasser - 1658) 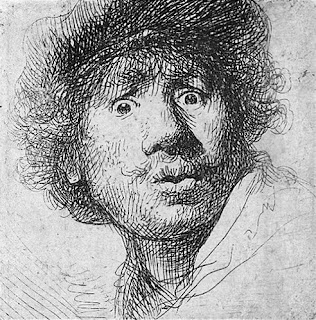 Freud is known for a distinctly unglamourous approach to his subjects, a clarity of vision he shares with Rembrandt (mind you, pear shaped ladies were all the rage back then, so they say). Both are also meticulous; Freud's etched hair is incredibly alive, the folds of cloth and skin wonderfully realized. In both you feel the living subject. (Self Portrait with a Cap, openmouthed. Etching. 41 × 41 mm -1606)

As I walked through, I overheard someone dismissing the show as kind've boring since it was all so representational. Yet I'd argue, the human figure continues to be a strong and relevant mode of expression - a mirror into how we view our place in the world.