Ruth Mathiang at the Gladstone Hotel

A big set of pipes are tucked into the petite frame of Ruth Mathiang, who filled the crowded 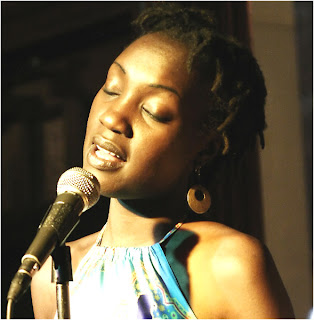 Melody Bar at the Gladstone last night with her expressive voice. She's an assured performer and obviously at home on stage as she went through sets that blended her own songs with a few covers.

Backing her up was a solid trio of Waleed Abdulhamid - who I keep seeing with band after band in this city - on guitar, Derek Thorne on percussion and Charles James on bass - the kind of musicians who can create the polyrhythms and multiple harmonies necessary to Mathiang's moveable music without breaking a sweat.

From Sisi, by Ruth Mathiang:

Ruth's story is quite a dramatic one. Born in southern Sudan during the civil war, her pastor f

ather often found himself at odds with the ruling powers, and was imprisoned for his political beliefs. He eventually found employment in Kenya and secretly moved his family of 9 children there. Ruth grew up in refugee camps in Kenya, where she began her musical career. Both parents were gospel musicians, and in Kenya she was also influenced by jazz, hip hop and reggae, along with traditional forms of African music - threads you hear intertwined in her work. She began writing her own pieces and performed at cultural events while in Kenya, and she lists Miriam Makeba, Bob Marley, Tracy Chapman, Ben Harper and Nina Simone as her influences. She sings in English, Spanish, Arabic and Kiswahili.

When it came time for higher education, opportunities were few until she became part of a student refugee programme that brought her to Canada to study at the University of Prince Edward Island. True to her roots and interests, she studied political science and women's studies, underlying the themes of social justice that run through her songs.

It was a relaxed show, with some extended solos and jams, and an easygoing flow. You can check her out in action from a few years ago here.