This You Call Civilization? - Wangechi Mutu at the AGO

on April 01, 2010
Wangechi Mutu
This You Call Civilization?
Art Gallery of Ontario - to May 23

This You Call Civilization? is both appealing and provocative, and I suspect that's just the artist's 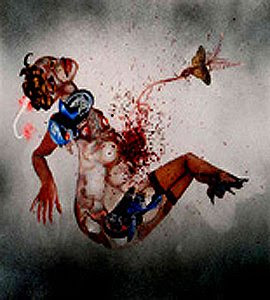 point. Watching people's reactions to the show yesterday, I saw people approaching Mutu's lyrical compositions at first eagerly, drawn by the organic flow of colour, form and images. As they would examine the collages more closely, that initial delight often turned to something more thoughtful, with perhaps a frown knitted over the fascination. (Untitled, right, 2004)

Born in Nairobi, Kenya, Wangechi Mutu made her way to the US in the early 1990's after initial studies in the UK. After a BFA at NYC's Cooper Union, and an MFA at Yale completed in 2000, she quickly developed an international reputation as a provocative visual artist. It's a reputation that continues to grow exponentially, with this, her first show at a major North American museum, opening the same week she won the Deutsche Bank's international Artist of the Year award, (and as part of that award, her work will be shown at the Deutsche Guggenheim until June 13, 2010).

She's best known for her collages, and other work that examines issues of gender, African identity, beauty and body image, post-colonialism and the politics of violence. The collages are wonderfully intricate, most often using the female form in conflicting contexts. The Ark, for example, is a 2006 work that pairs postcard sized collages. Each examines the form of the African woman, juxtaposing the hyper sexualized pornographic stereotypes of our modern era with the sorts of images of traditional African women many of us will remember from old National Geographic type photography. Two sorts of objectification, in other words. According to Wangechi in a video made for the AGO show, the piece was created "so you reflect on both without replicating the objectification of either one".

Her pieces begin with found images, assembled and arranged, to which she adds ink washes, 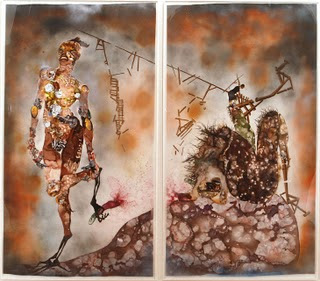 sometimes glitter, paint, soil, pearls and jewels, and other items to create a seamless and absorbing flow. The ink creates multiple layers and textures as it adds colour, sometimes used to make expressive marks and shapes. The result comes in fluid compositions that are amazingly vibrant, full of colour and mottled textures. You can see rhythm and music in her pieces, the vibrance of the composition, before you take in the often disturbing clashes of pornography and pop culture. Tropical motifs are common - parrots, palm trees - along with abstracted lines and other elements, and some of the pieces are quite large. The title of the show is also the title of one of her pieces, what begins as a strutting female figure who morphs into much more, with breasts that erupt like gooseberries among a dizzying mulitplicity of forms and images. (Above - My Strength Lies, 2006)

Wangechi is also known for her installation pieces, and the AGO let her have a go at one of their walls. It bears a 'wounded' texture, with hacked out holes that have been painted red in one of the rooms of her show. It's a fitting backdrop for her work, and a show that's a must see in my book. She's currently based in NYC, with a studio in Brooklyn.