on April 08, 2010
Where the Blood Mixes
April 7 – 18
at Factory Theatre Toronto as part of the Performing Spring Festival
Written by Kevin Loring
Directed by Glynis Leyshon 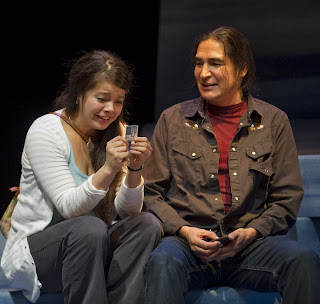 Starring Ben Cardinal as Mooch, Kim Harvey as Christine, Margo Kane as June, Billy Merasty as Floyd, and Tom McBeath as George.
Music is composed and played by Jason Burnstick

Can a man who's lived for years in a downward spiral climb back out of it, and above the past? In Kevin Loring's play Where the Blood Mixes, it's not only Billy Merasty's Floyd who is living in a state of alcoholic denial. A whole generation of the indigenous community at the place where the Thompson and Fraser rivers meet lives under the crippling shadow of the residential school system, and, as Margo Kane's June says, it's a sad legacy they've passed onto the next generation. (Kim Harvey & Billy Merasty pictured.)

If the play's seeming incredibly dark at this point, credit Loring's script for investing the piece with both hope and humour. It begins in fact as something of a comedy about Floyd and Mooch, the two drunken wastrels, with George the bartender as their foil. June is also introduced in a scene in the bar as a larger than life comedic character, the classic beleaguered and furious girlfriend of one of said wastrels. As the story begins to take on other elements though - Floyd's nightmares, Mooch's outbursts - so do the characters unfold as people haunted by the residential school experience and its long shadows into the present, where many of their generation have died too young.

Part of the fallout is the fact that Floyd's daughter Christine (Kim Harvey) was taken away from him as a young child, with him ruled an unfit parent. He's gotten a letter from her as a young adult, looking to come back to her roots and get to know him, and that's the trigger for his 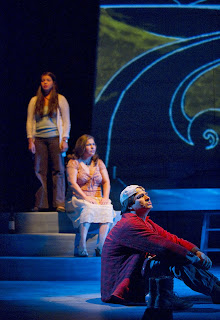 nightmares. It's in one of the memory scenes, where the two of them talk and joke as father and young daughter that Floyd really comes alive, a nice bit of acting that illustrates the depth of his fall into beer fueled oblivion. Kim Harvey also does a notable turn, morphing from the idealized figure in Floyd's dreams and memories into a real young woman in search of a past.

A couple of the scenes were speech heavy, where one character who would expound at length while others simply sat and listened, and it slowed the play a little, but I wouldn't call any of it extraneous. One of the main factors working towards the success of the piece, it has to be said, is the incredible guitar playing of Jason Burnstick, who actually began the evening with a short solo set while us playgoers chatted. His music is bluesy, sometimes flamenco tinged, and during the play he follows the words and action of the story seamlessly with a live soundtrack. (Pictured - Ben Cardinal, Margo Kane, Kim Harvey from foreground to background.)

I'm always fascinated with the ingeniousness of set designers, and in this case Robert Lewis' clever construction across the middle of the stage served as bar, front step and river bank, with a screen behind it, and a door. Atmospheric projections designed by Jamie Nesbitt shimmered on the screen as water, or swirled with lights and First Nations motifs in a very effective display.

The Thompson and Fraser run into each other in two distinct streams - one muddied and one blue and clear, in an apt metaphor for the play's title. Loring's take is one of absolute clear sightedness, one that holds no cows sacred, and is not afraid to set us at a barstool beside the two shell shocked survivors and let us laugh at their jokes.

Kevin Loring's début play was a hit Toronto's LuminaTO Festival and the Magnetic North in Vancouver in 2008 , and recently ran as part of the Vancouver 2010 Cultural Olympiad.