on April 29, 2010
I just got back from seeing Wingéd, a really fascinating and thought provoking take on three of the major icons of classical myth - Icarus, Lucifer and the Phoenix. I'm doing a review and interview piece for Lucid Media Magazine - the print version - but it doesn't come out till the June issue and I wanted to pass along the information. Check it out if you're in Toronto - this is from media releases: 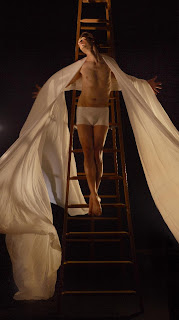 Poetic, surprising and irreverent, the world premiere of Wingéd inspects and dissects relationships between fathers and sons, friends and lovers, predator and prey and serves up a clarion call for the transformation of humankind in a series of dramatic monologues about three mythical winged beings: Icarus, Lucifer and Phoenix.

Wingéd is performed amidst a special exhibit of paintings, photographs and sculpture which are thematically linked to the performance. The artworks are by ELDON GARNET, MENNO KRANT, BRUCE EVES, KEITH SHEPPARD and RASHMI BAIRD

David Tomlinson is an accomplished writer, actor, clown and sketch comedian. In addition to his numerous stage performances (including numerous Rhubarb! Fesivals, Toronto Masque Theatre's The Tears of a Clown, Toronto Festival of Clowns and and Sky Gilbert's Rope Enough and Happy), he has played at Vancouver's Sketchfest and Montreal's Just For Laughs festival as part of the sketch duo GLYPH. His television credits include Howie Do It, Queer as Folk and The Newsroom.

Whetstone Artistic Director and Wingéd director Diana Kolpak has helped develop more than a dozen original productions that have been performed across the country. She recently curated the sold out debut of pandemonium machine for Teatro Magnetico.

PS - I'm also in the current and next issues of Lucid Media Magazine - print version.