Check it out here

Montreal, May 20, 2010 – The National Film Board of Canada (NFB) announced today in Cannes the winner of the 6th NFB Online Short Film Contest: Crash! Bang! Wallow? by Jon Dunleavy and Keith Wilson-Singer of the United Kingdom. The award ceremony was held this afternoon at the Short Film Corner in the presence of Claude Joli-Cœur,

Assistant Commissioner of the NFB.

This year, the 10 shortlisted films generated more than 2 million views in 14 days – an increase of over 1000 percent compared to last year – on the NFB’s English and French YouTube channels. This sixth edition was organized by the NFB in collaboration with the Short Film Corner, the meeting place in Cannes for short filmmakers from around the world, and in association with YouTube, the world’s most popular video sharing site. In partnering the contest, the NFB continues to encourage the creators of bold and innovative shorts.

The public had 14 days to vote online for their favourite short film on the YouTube site, which recorded more than 20,000 votes from all over the globe. The contest attracted the attention of a large number of subscribers to the NFB Twitter accounts @thenfb and @onf, reaching close to 16,000 short film lovers. Numerous blogs aired the videos on their sites.

The winning short, Crash! Bang! Wallow?, is an animated film that tells the tale of ex-Hollywood stuntman Larry LeTan and his fight to find a place in the modern world. Filmmakers Jon Dunleavy and Keith Wilson-Singer will receive a digital camera/HD video camera and a laptop computer from the NFB. The winning film can be viewed until June 20, 2010, at NFB.ca/cannes or youtube.com/NFB. 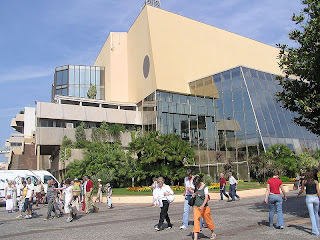 The short films that came in second, third and fourth place are Love and Theft by Andreas Hykade (Germany), The Technician by Simon-Olivier Fecteau (Canada) and The Story of My Life by Pierre Ferrière (France).

The ten short films of this 2010 edition were selected by Danny Lennon from the many entries submitted to the Cannes Film Festival Short Film Corner by filmmakers from around the world. (Image is of le Palais du Film in Cannes)

Canada’s public film producer and distributor, the National Film Board of Canada creates social-issue documentaries, auteur animation, alternative drama and digital content that provide the world with a unique Canadian perspective. The NFB is expanding the vocabulary of 21st-century cinema and breaking new ground in form and content through community filmmaking projects, cross-platform media, programs for emerging filmmakers, stereoscopic animation – and more. It works in collaboration with creative filmmakers, digital media creators and co-producers in every region of Canada, with Aboriginal and culturally diverse communities, as well as partners around the world. Since the NFB’s founding in 1939, it has created over 13,000 productions and won over 5,000 awards, including 12 Oscars and more than 90 Genies. The NFB’s new website features over 1,600 productions online, and its iPhone app has become one of the most popular and talked about downloads. Visit NFB.ca today and start watching.
Cannes film contest NFB short film youtube