on May 21, 2010
9 Parts of Desire
an interview with Writer/Actor Heather Raffo

Continues at Toronto's Theatre Centre to May 23

As an American whose father was born in Iraq, Heather Raffo naturally felt torn by this generation's conflicts in the area, beginning with Bush Sr's Gulf War. It led her to question much, and to wonder how to make sense of both sides of the story. Luckily for the theatre world,

it also led to 9 Parts of Desire, a one woman show that has her taking on the personas of various Iraqi women living in times of war.

"I would say the research was multi-pronged," Heather says. "Some was done in Iraq in 1993 when I was there visiting family - before I thought about doing a play. I was curious about my Iraqi roots." The initial spark led to a continued interest in the women she'd spoken with, who'd taken her into their trust, and she kept in touch over the years. "It was a decade's worth of phone calls, just out of interest, not because I had a piece in mind."

Once the idea of a play began to percolate, those long conversations became the starting point. "There was a few years of more earnest information getting," she describes. "When I decided I wanted to write about an artist, for example, I contact the Iraqi arts community." In the process, the drier aspects of research took on a more personal tone. "I was talking with Iraqis that I came to care very much about."

The characters you see in the play are composites, not a depiction of specific people. "It's not documentary theatre," she insists. They are characters that embody the spirit and experiences of the Iraqi women she came to know.

Putting together a monologue play can seem deceptively simple. As Heather tells it, however, it was a long process that continued long after its début. "I had a few monologues done, but putting them together was most of the work as a writer." The order of the monologues and how they segué into each other was of prime importance, setting the tone for what the audience sees and absorbs. "I wanted it to be more than the sum of its parts."

What Toronto audiences see in 2010 is a different version than what premiered in 2003 in Edinburgh, even different than the NYC version that played to sold out houses for 9 months in 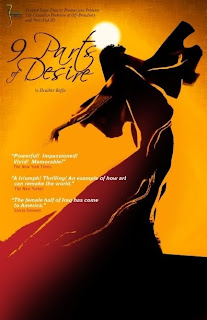 As events unfolded in Iraq, it changed the play. Heather wanted to heighten or emphasize certain elements. "I want the audience to get the sense of a fractured psyche - of one person torn in many directions. I want them to see the exhaustion of one person as they shift from role to role." Her performance mirrors the conflict itself. "The war is apparent on stage."

Tweaking the play could only happen as she performed it, the pace, rhythm and dialogue between the characters changing along with the nature of the war itself. Unlike many depictions of highly charged material, though, she wanted to envelop her audience in the experience, not confront them with it. "What was more important was making the audience feel like they were there. The audience is very much endowed in the play as a character, like a beloved friend of these women. It's a very intimate conversation - not agit-prop."

In depicting the lives of Iraqi women, it speaks to a sense of the feminine experience of war. "I think that the play is riddled with images that mind us of the necessary balance between the masculine and feminine principles." Nonetheless, you won't find a Westerners typical blanket condemnation of the role of women in Islam. It's not about the clichéd understanding we have of gender issues in the West. "I've found it gratifying that Iraqi men who've seen it have felt the same way as the women," she says - proving she's gotten the stories right.