on May 12, 2010
The Alwin Nikolais Centennial
Celebrating 100 years of Nikolais 1910-2010
Choreography, sound score, scenic & lighting design by Alwin Nikolais
Under the artistic directoion of Alberto del Saz & Murray Louis
(Artistic Directors of the Nikolais/Louis Foundation for Dance)
Featuring the Ririe-Woodbury Dance Company
at the Joyce Theater, New York - May 8, 2010

You can check out a smattering of the show here

Choreographer Alwin Nikolais is truly a legend in the world of contemporary dance. The centennial celebration of his art began with a brief film excerpt of a gala held in his honour in 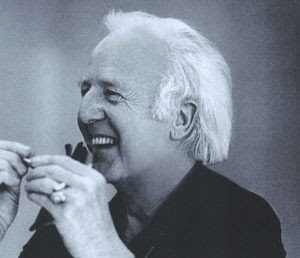 1991, including a film within a film and short biography to put the performance in context. Smitten with the dance bug, he became a choreographer, but then a tour of duty in WWII left him with new ideas about the art form. He wanted to do more than just boy meets girl in movement. He wanted, and in fact succeeded, in transforming it into a pure expression of movement in space.

I never met the man, naturally, but I think you can clearly see his child-like delight in experimentation. He moved the focus from the individual dancer to using the dancers as the moving parts in elaborately conceived tableaux that included lights, projections, colours and more. He was a multimedia artist before anyone had even conceived of the term.

The first half of the programme included Tensile Involvement and a number of excerpts from Liturgies. Dancers, props and lights became abstracted shapes and lines that mirrored the outlines of avant garde music. The costumes were vivid yellow with red stripes that echoed the ribbons they pulled and manipulated on stage (see image below!) or white on white, with painted fluorescent spots that glowed in the coloured lights. One piece was performed largely horizontal, on the floor with limbs that quivered and moved in agitated synchronicity with the music and atmospheric glow. There were circus elements, like the piece that saw two male dancers 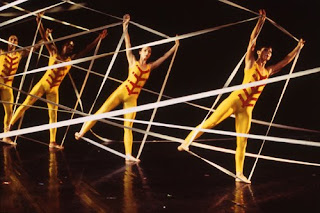 shouldering a bar from which a female dancer, dressed as something like a white monkey, spun and undulated and jumped. It was a really well chosen succession of pieces that unfolded in a dazzling panoply of all that Nikolais (called "Nik" by his friends) and his oeuvre stood for.

The second half brought us Crucible and Tower, two pieces that neatly contrasted each other. In Crucible, the dancers performed behind a metallic sort of barricade that was angled slightly towards the audience, against a darkened backdrop with coloured lighting. They emerged first as hands and feet only, gradually revealing themselves during in the course of the piece. They became odd creatures, their movements mirrored in below them on the surface of the barricade, dressed only in white thongs - both male and female - their bodies individual yet oddly similar.

In Tower, (the third act of Vaudeville of the Elements,) the dancers were in coloured

coveralls, each carrying a contraption that seemed like parts of scaffolding - an "H" with a cap on top that became windowframe, doors, gates, and were finally constructed into the tower itself. The dancers were almost constantly vocal in a cacophony of dialogue snippets, alternately provocative I'm getting married next week... but I'm not married yet! sometimes confused, belligerant and so on (the Tower of Babel came to mind).

At intermission, the audience murmur was all about how "unusual" and "different" the pieces were (these choreographed in 1965 and 1983 respectively). There was much muttering at the semi-nudity of Crucible (a piece that premiered in 1985); in fact a few people got up and left and the young man next to me was quite incensed - What's so artsy about that? They could've worn flesh coloured tights! My dad's going to freak when he sees this! - and the applause was quite subdued. That's the thing about avant garde, though, isn't it? After 50 years, the audience is still catching up to the idea.
Alwin Nikolais American dance contemporary dance joyce theater New York dance scene Ririe-Woodbury Dance Company