Along the dowdy streets of Hochelaga-Maisonneuve in east Montreal, the unemployment rate is 90% and the rate of underweight births rivals that of Morocco. Most families are single 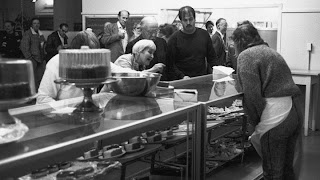 parents with an average of 4 children. It's a textbook recipe for a downward spiral into a multitude of social ills. Yet... Au Chic Resto Pop begins and ends in upbeat songs about love and second chances performed by its feisty residents in what you might call a docu-musical.

Amid the down market tenements and dirty streets, the group decided that they needed to get out of the Welfare rut, and decided that they were going to come up with their own solutions, be self sufficient. No more charity. What they came up with is part business, part support group, and part remedial training centre - Au Chic Resto Pop. As one of them explains, they recycle food and human potential.

The food they serve is collected from stores and businesses, some as outright gifts, some in lieu of what they'd throw away. A donut store manager explains that they have to bake a new batch of donuts every 8 hours at a minimum, so they'd otherwise throw out whatever was a mere 8 hours old. When it comes to produce, Québécois director Tahani Rached shows her activist roots and goes into a sidebar about the appalling level of waste in the produce business - caused by our reluctance to buy anything that doesn't look 'perfect' - in an argument about sustainability that, let's not forget, came 19 years before the current discussion in mainstream media. It does 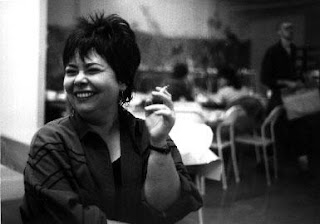 distract us from the story of the Resto, however, with only a tie back into it at the end of a long aside.

It's not that there isn't enough of a point to be made in the story of the Resto itself. The meals they serve up twice a day cost only $1, with easy credit terms, in an effort to combat the very real scourge of hunger. As one of the neighbourhood's teachers explains, after the 15th of the month, the kids come to school hungry, and just can't keep up with the work. (Image is of indefatigable Annie, the boss of them all)

There are also some unique HR challenges when you're giving jobs to people who may be holding one for the very first time, people who might have been sitting in front of the TV or a bottle for years and years.

Much of the film fleshes out the story of some of the main characters at Au Chic, from Philip the guy who picks up the food in a van, the women who work in the kitchen, Daniel who cleans up, and more. Each of them performs a song they've written with composer Steve Faulkner, and the music is classic rock-ish - twas the era, after all. The lyrics are autobiographical, and talk of their journeys from down and out to working at the Resto. It's a cute take on the participatory documentary, and the results are sincere and emotional.

You can check it out here (in French) if you can't make it to the screening.
canadian film documentary film hot docs nfb documentary tahani rached