An interview with Niki Landau, writer of
The Corpse Bride
The Young Centre, Toronto
June 4th at 8pm and June 5th at 2pm and 8pm

I have two tickets to give away to the June 5 matinee (2pm) performance of this original show - contact me via Twitter (link to the left of this story).

Toronto's premiere of The Corpse Bride is an original production of  Theatre Panik. It's described as a darkly comedic Canadian interpretation of the famous Yiddish folktale that follows a young bridegroom, who, on the way to his bride’s village, accidentally weds a corpse bride. Theatre PANIK reclaims the intent of the traditional tale through Yiddish theatrical tradition using rhetorical gestures and a silent film style mixed with projections.

Of special note is the fact that former prima ballerina extraordinaire Evelyn Hart will be appearing in the play - her first appearance on stage in years.

Here's a bit of a Q&A with playwright Niki Landau (pictured below):

Q: How did the idea of doing this particular story come about?
A: I found a Jewish folktale called ‘The Corpse Bride’ when working with an acting class at York University in 2002. It struck me as very theatrical, even though it was less than a page in length.  There’s a groom, a 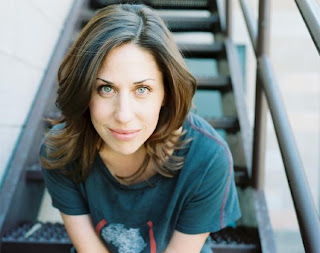 bride (who the groom’s never met) and the Corpse Bride – quite a love-triangle! I also liked its focus on women. I spoke to my husband, director Paul Lampert, about the folktale and he conceived it as a movement piece set to music.
Q: How did the production/people come together? Was it an existing group, or was there a particular reason why people came to work on this project?
A: We knew the story needed a big cast, with lots of young people in major roles. We thought it would be a great opportunity for a graduating class of a theatre school, so we spoke to George Brown Theatre School, and they were excited to be part of the project.  The veterans, including the wonderful Richard Greenblatt, 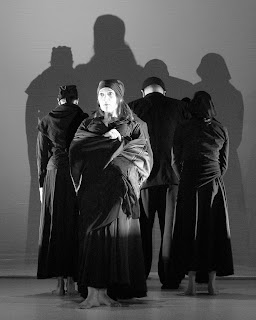 Sarah Orenstein (pictured left), and Bill Vickers, are playing all the ‘parental’ roles, and the mix is just great.  And, of course, Evelyn Hart, former prima ballerina of the Winnipeg National Ballet, is incredibly exciting to watch in this show, which is so different from anything she’s done in the past.
Q: Give us a brief history of the play's development - I've seen mentions 2 or 3 years spent in development. What did that entail?
A: We actually started researching the show in 2002, but then took a break to do Territories. When we came back to it, Tim Burton had found the same folktale!  Since his version veered away from the folktale’s cultural origins, we decided to continue on. In 2005, I wrote a long short story to fill out the details of the folktale. In 2007, we did a first workshop focusing on movement and music, and presented it at The Factory Theatre. ‘The Corpse Bride’ was then part of the Groundswell Festival at Nightwood Theatre in 2007, where we developed a detailed scene breakdown that Paul has used for the show.
Q: How have you put together the details, like staging, props, lighting, costuming, that kind of thing? What will the audience  see on stage?
A: This show is done in the style of silent film, so it’s like nothing you’ll see in ordinary theatre. You’ll see the large, rhetorical gestures like in the old movies –  set to music from a live band, led by the incredible John Gzowski. Lighting design is by Shaw veteran Kevin Lamotte and set design is by award-winning designer Teresa Przybylski.  Dialogue will be projected on to a screen in the silent film style. The entire show is an exciting mix of the old-fashioned and the modern.
evelyn hart the corpse bride theatre panik toronto theatre scene young centre