Toronto, May 4, 2010- dance Immersion, a Toronto-based organization that provides guidance and opportunities to Canadian dancers of the African diaspora, celebrates its 16th anniversary with a Showcase Presentation of up-and-coming dancers of African descent, running Thursday, May 27 to Saturday, May 29 at Harbourfront Centre's Fleck Dance Theatre. A Talk-Back follows the performance on Friday night (May 28), giving audience members a chance to interact with the dancers and get a glimpse behind the process of dance creation. 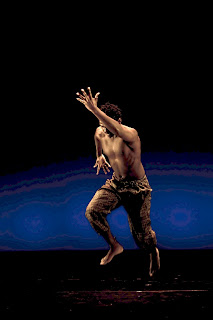 Toronto's Aya Dance Collective is an emerging company founded in 2006 by Lua Shayenne and Roshanak Jaberi, a multicultural female-driven duo fueled by a desire to inspire social change through the art of movement. The collective has performed at the Dance Ontario Dance Weekend, Series 8:08 and Dusk Dances. They perform Lua Shayenne's War Child, a piece 4 dancers and 3 musicians that depicts the tragedy of child soldiers, and explores the emotional and psychological effects of the horrors as well as the innate qualities of love and forgiveness that all children possess.

Originally from the Central African Republic, Montreal-based dancer, choreographer and composer Ghislaine Dote's pieces have received praise from critics in Toronto and Montreal. In addition to her contemporary dance work with companies such as Sinha Danse Company and Flak (Jose Navas), she has performed with Cirque du Soleil, African music group Laobe, and since 2008, Luc Plamondon's Rock Opera Starmania. For the dance Immersion showcase, she remounts Mâle de femme, a 2006 quartet about women's relationship to men through time which originally ran in Montreal to popular acclaim.

Sharon Harvey is a dance specialist and faculty member of the St. Lawrence College in Brockville, ON, in the Musical Theatre Department. Her previous work with Toronto's renowned Ballet Creole has been described as "sensuous" and "heart-wrenching." Her Showcase piece, Cargo, is a work for five dancers that examines the importing and exporting of the human race through slavery, immigration, refugees and illegal aliens.

Led by dancer/choreographer Kevin A. Ormsby, KasheDance uses an emerging dance technique created by Ormsby called "kashedantek" to create explosive, subtle and confronting works that fuse ballet and contemporary dance with African and Caribbean traditions. The world premiere of In SEARCH of OURselves, a piece for five dancers, explores the displacement of peoples across borders and examines the fundamental question of how we affirm ourselves.

Born and raised in Sassolburg, South Africa, Mafa Makhubalo has been dancing since the age of five. He has performed at events such as the FIFA World Cup Conference in Morocco and the Grahamstown Arts Festival in South Africa. In Canada, he apprenticed with Ballet Creole and currently performs with OMO Dance Company, His solo, Colour of My Soul "RED," interprets various dances performed during traditional ceremonies in China, South Africa, and India and fuses them into a contemporary African style that forges a cultural link between the past and present. The work also explores the colour red and its relation to mood, emotion and behaviour.

Edmonton's Movements is an internationally acclaimed Afro-Caribbean dance ensemble dedicated to inspiring and educating about dance, African and Caribbean cultures and multiculturalism. Founded by Sharlene Thomas in 1990, Movements presents Watercolours, a narrative piece for 4 dancers that reflects on the quintessential essence of water, and the repetitive neural activity in the mind that can generate oscillatory activity in many ways that drives us.