Screening at Hot Docs - check out screenings times at the link.

A fire hydrant shoots water in plumes up to the sky above a streetscape at night, as cars hesitate, all over the street in their efforts to avoid it. A line of cars waits in gridlock on a bridge. Police seize a cache of bear paws from the cooler at the back of a store, and pigs run amok on a 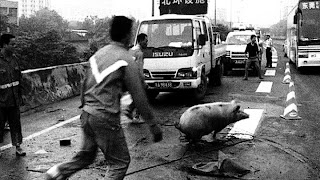 bridge, dodging their would be captors between traffic. Disorder flicks back and forth across 20 such scenes, all taking place in an unnamed Chinese city and filmed in grainy black and white.

What begins as an often amusing, often puzzling Joycean kaleidoscope of scenes gradually knits together into a collage/portrait of this teeming metropolis, documenting its evident growing pains. There's a guy who claims to be hit by a car, he lies on the street but no one seems to believe him. The driver who allegedly hit him argues about how much it will cost to pay him off, and ambulance workers drag him roughly across the street for an examination they say is a waste of time.

The hapless police emerge as, if not exactly heroes (they're too ineffectual for that,) then as figures in the service of the decaying rule of order, dispatched to try to contain the malaise - trying to round up the pigs, or talk the guy off the bridge, or in the official who tries to investigate a complaint against a restaurant. Their hearts clearly aren't in it most of the time (it must be an exhausting job!) but still they show up.

The one constant in all the vignettes is the crowds of people who witness and participate in the mayhem. The mill about aimlessly, they stop to watch, they take pictures. No one is ever alone, wherever this is. Nothing is clean; everything takes place in an anonymous, cheap and new urban landscape. There is constant movement, never quiet or peace. People cope with living in a street that's flooded to knee level and a man walks through the filthy waters of the river, his passage sending clouds of black debris whirling in the water behind him. He casts a net, and later we see him gathering fish from it to eat.

"The faster Chinese urbanization advances, the stranger people's behaviours and moral standards become." The observation by director Hang Weikai really says it all.