Enemies of the People - A Hot Docs Review

Enemies of the People isn't the kind of film I'd normally watch. It takes a journey deep into 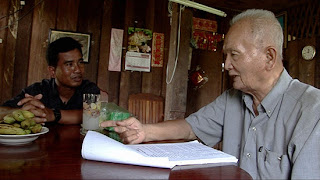 the human heart of darkness of the kind that stays with you long after the film's over, unveiling the reality behind that oft quoted phrase about "the banality of evil".

It's not that what you'll see on screen will be horrific. What you'll see is Cambodian filmmaker and investigative journalist Thet Sambath's decade long quest to find answers to what happened not only to his family, but to the country itself during the bloody reign of the Khmer Rouge and Pol Pot. He drives through pastoral countryside with its the flooded fields. Bubbles come up through the water, and someone mentions that the bubbles come from gas as all the bodies beneath it decompose. These are the Killing Fields, and Thet's journey brings the past back to life in the memories and words of those took part. (Image is of Thet and Nuon Chea)

Through dogged footwork, he finds a few of the former executioners, including two farmers called Mr. Khoun and Mr. Soun, and he works on them by courting their trust. He talks to people who dug graves in ditches where 30 to 40 bodies would be dumped at a time as you view the lush, 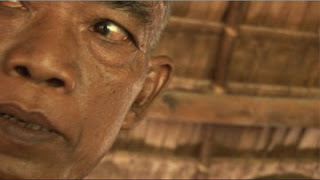 green countryside that exists there today. Mr. Soun in particular is eager to unburden himself of his toxic secrets. "My mind, my soul, my body is spinning inside," he says, eyes red-rimmed as he looks on the watery landscape. "All the things I did are flashing in my mind." Later, however, he'll demonstrate how the mass killings were accomplished. "I'd slit so many throats my hands ached, so I switched to stabbing them in the neck," he explains matter of factly. (Image is of Mr. Soun)

Thet also develops a somewhat surreal and ongoing relationship with Nuon Chea, "Brother Number Two" after Pol Pot himself in the regime. For him, the conflict was about the purity of the communist revolution. After the end of what we call the Vietnamese War, erstwhile allies Vietnam and Cambodia became enemies. The Khmer Rouge feared that its large population of ethnic Vietnamese (among others) would be sympathetic to the enemy. What Nuon remembers and describes as a careful investigation of individuals and "solving" of the problem of Vietnamese sympathizers and dissidents became a blanket order to find and eliminate all ethnic minorities at ground level during a reign of terror that lasted from 1975 to 1979. In between the upper and 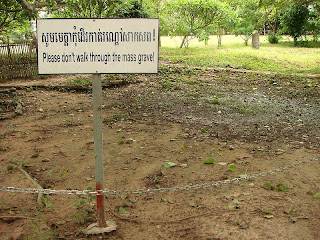 lower echelons of the party was a tangled network of truly Kafkaesque proportions, each level only knowing who authorized what one step up a long and winding chain of command. Nuon says he only remembers 'hearing' about the killings. (Image of Cheung Ek Killing Fields site, taken by Adam Jones near Phnom Penh, Cambodia. May 2009)

The film - and I'm sure Thet's intentions - take an unexpected turn. Such a long, careful courtship of trust drew him into their stories. Thet's father and brother were murdered by Khmer Rouge soldiers, and his mother, forced into marriage with a party member, died in childbirth not long after. But he keeps that secret until the end, so as not to give his subjects the impression that he was out for some kind of revenge. The resulting relationships are an odd offshoot of something like friendship, even sympathy for their current state.

At the beginning of the film we watch as Thet leaves a patient wife and young family driven to find answers in the lovely, haunted countryside. By the end, he's ready to go home, and his peace is the only victory possible. Amazingly, the Khmer Rouge held sway in parts of Cambodia until roughly 1999, and the UN genocide tribunals looking into their ghastly crimes are only going on as we speak.