Inside Out LGBT Film Festival - Previews Part I

on May 18, 2010
Inside Out LGBT Film Festival
Preview/Reviews Part I

Here's a trio of reviews, more to come tomorrow - screening times at the links:

The success of a short relies on an economy of filmmaking - how quickly can you establish the story, the mood, the characters? Director Christopher Banks does a beautiful job of it in Communication, revealing a tragic twist to the story of how a young, handsome man inherits a lavish estate from a former professor and lover.

He walks through the house, and various objects bring back memories of his half tentative encounters with the older man, and a dinner party where a boorish former love (of the prof's) shows up to spoil the idyllic mood. Every scene reveals a little more, and Banks is aided by the lush and lovely New Zealand countryside in this nicely realized story of love gone awry.

Oy Vey! My Son Is Gay! is formulaic comedy elevated, to the extent that it is elevated, by the solid and watchable performances of screen veteran Saul Rubinek and stage veteran Lainie 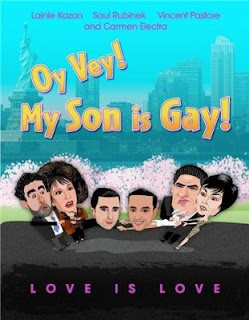 Kazan. The story goes like this: Jewish mama Kazan wants to find a nice Jewish bride for son John Lloyd Young, who happens to be gay, but somehow nobody knows this. By a wacky misunderstanding, she thinks his centrefold model friend (because all gay guys have hot chick friends, right?) is actually the 'relationship' that he tries (but can't succeed because of one of those scenes where he can't get the words out of his mouth as she talks over him - you know what I mean, it's in every rom-com) to tell her about.

The funniest scene comes where he finally tells the fam he's gay, this during a wedding ceremony in a synagogue. Scenes that focus on the talents of Rubinek (the disbelieving dad) and Kazan as they agonize over the implications together also stand out. Unfortunately, much of the rest is a nonsensical progression of set ups to punchlines that don't work as often as they do. The script tries to stand on too many soapboxes. This is a fantasy world where a newscaster tells the audience that 'it's cool to be gay' and apparently looks and age don't matter either, even as it blends in the realistic sad/funny struggles of the parents to understand. There are no real or identifiable characters here, just mouthpieces for the writers' various pet causes.

I love and only love the fairer sex, and thus beloved by them in turn, my heart revolts from any but theirs.

Miss Anne Lister was a historical figure, a woman of the landed gentry who lived in the early 1800's (1791 - 1840) in Yorkshire, England. Widely travelled, she's considered by many to be the 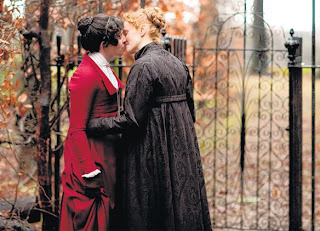 first 'modern lesbian', in that she lived openly as such as a contemporary of Jane Austen. Her 4 million word coded diaries, which speak (when you know the code) openly of her loves and dalliances, were only fully deciphered recently, (you can check out part of that story here,) and brought to the screen in this BBC2 production.

The story is given a lush and literary treatment, illuminated by the beauty of the rain drenched English countryside, the foggy moors. It chronicles her longtime love for a woman who loved her back, but chose the conventional life of marriage, the triangles with a former lover, and her eventual happiness with a rich widow. In between there's a smattering of business rivalry, discrimination and the murmur of gossip about the eccentric figure the locals called 'Gentleman Jack', but the storyline is more meandering than dramatic, and there's never a sense of real danger or unwanted consequences to the gossip.

What we do get a sense of is the genteel isolation of life in the countryside amongst the wealthy - a gilded boredom that surely led to her penchant for travel. It's a beautifully shot and interesting look at a historical figure taken at a leisurely pace.
anne lister carmen elektra gay film inside out lgbt film festival lainie kazan lesbian film saul rubinek