on May 19, 2010
Here's another trio of reviews you'll find in the programme at the 20th annual Inside Out LGBT Film Festival:
(screening times at the links)

The film begins and ends with scenes of the preparation for the funeral of one James L. Slattery, AKA Candy Darling, who died in 1974 but whose ashes were finally put to rest by longtime friends Jeremiah Newton, right beside those of his mother, in 1991. It's a sad but appropriate 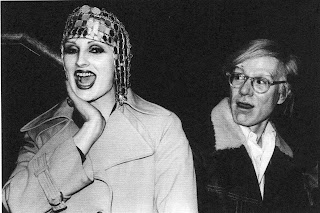 frame for this ultimately melancholy story of an Andy Warhol-era icon.

Her story's told in images and interviews with people like John Waters, Fran Lebowitz, actor Paul Ambrose, and others who'd spent time in Warhol's inner circle. Sometimes we hear Jeremiah's diary, sometimes excerpts from Candy's diaries. James, as he began his life, grew up in a sterile new subdivision just as ugly and uniform as they knew how to make in the 1950's, and into an abusive family. He ended up in New York City, (presented as a kind of repository for the unemployable, he he) already dressing and living as a woman - the former being illegal under then applicable state laws.

Fixated from an early age on images of Hollywood beauties of an earlier era like Kim Novak, Candy Darling was created as an ode to that star system and those values. She was beautiful, a vision in platinum blonde. Candy found adulation on the stage in the West Village. She really wanted to be a movie star in that glamourous mode, and thought that Warhol's low budget art films would be her ticket. And hey, I've been in many myself, I'm not knocking art films, but they tend to open doors to... more art films, and not much more.

We're shown a world of navel-gazing scenesters obsessed with being seen at the right clubs by the right people every night. Candy also found some success as a model, doing shoots with people like Richard Avedon, Robert Mapplethorpe, and even making the cover of Cosmo. Probably the height of acceptance came with her performance in a part written for her by Tennessee Williams in his play Small Craft Warning.

The problem is that Candy couldn't deal with what happened when the lights came on and the audience went home. In her diary, she talks about "my strange, stylized sexuality", and of her acute loneliness. She was "always sleeping on someone's couch", and chronically short of funds. She's even described by some as a classic hustler who turned tricks secretively - although it's denied by others, and many people quite close to her claim they knew nothing of her sex life.

The film does a nice job of portraying her all the same. The fact that the pieces only come together as a puzzle, and at that partly contradictory, probably says more than the evidence put together about this complex and sympathetic person who paid a high price for living as herself.

Just as the title says, this doc takes us through the meandering story of both Rufus Wainwright's first opera and its premiere in 2009, and a bio of the man himself - described by father Loudon Wainwright II as a "flamboyant toddler". 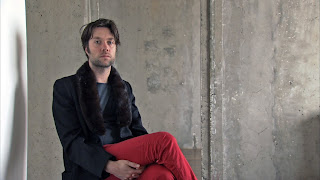 Kate McGarrigle, aforementioned father, boyfriend, Janis Kelly the soprano who sang at the premiere, and Renée Fleming, who's obviously taken with him and his work. Apparently his love for opera does go back to age 7 or 8, when he'd bother his mother to play the records and he describes an early infatuation with Maria Callas. The film takes an abbreviated look at the process of putting it together, including parts of his own story like the drug fuelled partying of his youth.

What's interesting is when they - Renée, Janis, others - talk about his music. He likes to use melody, deceptively simple sounding music where the melodies hover over harmonies that shift underneath. It's contrary to most dissonant 'new music' as we know it. "It's not challenging on the ears," and Janis describes it. Renée Fleming is thrilled at the injection of new blood into what is sadly seen as a museum art form.

On the whole, I found it overly reverential of every little eccentricity - like his francophilia, among others, but that's to be expected when most of the interviewees are close family and friends. Perhaps interestingly, the only dissenting voices in this 98% uncritical documentary were people he worked with, including American director Daniel Kramer, whose long suffering demeanour implies even more than he says (and I'll leave that for you to find out). When his boyfriend says he's "impressed" by what Rufus accomplished, it's nice... but leaves me with little idea of what to actually expect. If you're a Rufus fan, you'll love it, but if you're not, you'll likely be left a little puzzled, as I was.

You can check it out here.

Edie and Thea are two charming older ladies as we first meet them in this bio-pic, watching a slideshow of pics from a beach vacation decades ago when both were young and babe-ish. "Now you're old and I'm disabled," says Thea, and from there, their stories unfold in interviews and images.

The pair met and danced - a theme that would play throughout much of their 42 year relationship. The early days are also a portrait of the vibrant lesbian club scene of Greenwich 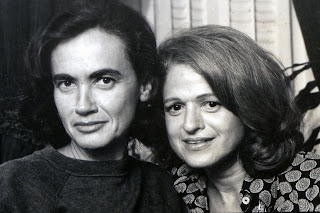 Village in the 1950's that morphed into the disco scene of the 1970's. Interspersed are their individual histories. Thea was born into a well to do Jewish family in Holland who had the foresight to escape to the UK in September 1939. Both had painful experiences with families that couldn't accept them as lesbians.

The film veers into what feels like an obligatory discussion of the Stonewall Riots, with a few minutes of marches and commentary that cuts immediately to Thea's diagnosis with MS. Edie waited 27 1/2 years for a "domestic partnership" license from the State of New York, and were finally married in Toronto in 2007 after 41 years of a love that endured till death did them part. It's sad on the surface, yet I couldn't really feel sad about a film that's really about finding and keeping that one true love.
gay film inside out lgbt film festival lesbian film prima donna opera rufus wainwright toronto film festival