Screening at Hot Docs - check for times at the link.

Neighbors takes you into Garden City, the leafy, gracious onetime home of Cairo's upper classes through the thoughts and memories of its residents both past and present. Along the way, the 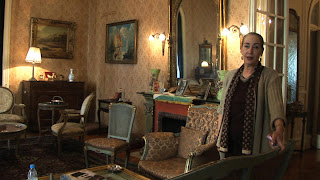 history of Egypt from the golden era of the 1920's to its present day struggles weaves itself together from the myriad threads of their stories.

The visuals are lovely. The narrow streets house huge mansions and gardens in a parade of various European styles, in the present day many of them abandoned or long since demolished. The multiple narrators of the film wander through the vast corridors and spiralling staircases now fallen into a genteel state of disrepair. Even in their state of elegant decay, you can still see the outlines of the grand lifestyle they must have housed. We hear from elderly people who grew up in the silver spoon enclave, the aging children of British diplomats along with a current diplomat or two.

They speak longingly of an era when everyone knew what was what. Fayza Hassan recalls life among a privileged elite, a time when her father could call in favours that would delay the launch of a ship for a day. "Sure, the people were angry, but we were so far from the people that it didn't matter." Later, the film gives more time to those who weren't fortunate enough to live in the glass bubble, and who have no nostalgia at all for a time when the elite lived high while the lifespan of the average citizen was a mere 40 years.

What happened to the gilded era? Nasser, not to put too fine a point on it. Privilege came at a price along the way, from King Farouk to Nasser to Sadat and Mubarek, each new regime had a new set of rules, and stories of brushes with the law and judiciary, and even imprisonment are a thread that runs through many of the narratives. One man looks through an old photo album torn by bullets from the Lebanon War. Nasser's reforms simply seized the property of the capitalist rich who populated Garden City. Forbidden to work or have any public identity at all, one man recalls "My father had to queue with other ex-millionaires to get his monthly allowances." In the rollercoaster of history, Sadat's Open Door policy of 1977 allowed many of the former capitalists to reclaim their assets, including a house then used by American diplomats.

It may have been elitist, but the people remember safe streets, a diversity of cultures and Fayza remembers that, on returning to Cairo after many years absence, she was so startled to find veiled women on the streets that they thought they were nuns at first. Still, as many recognize, the gains in public education and health have been massive.

Today, the old Garden City gradually succumbs to the onslaught of bland highrises. The American embassy, with an ugly, thick walled facade and a restrictive security policy that has closed streets and local businesses, is a flashpoint for resentment of a power they once admired. The Iraq War is mentioned frequently.

It's too bad that revolution and reform, which can have the most admirable of goals, nearly always destroys everything that's good along with everything that needs changing. Neighbors is a fascinating and intimate glimpse into both the past and present of a unique place.
Cairo documentary film Egypt Garden City hot docs Middle Eastern film toronto film festival