We Are One: South Sudan Culture Fest

on May 12, 2010
Batuki Music Society, in conjunction with the Sudanese Settlement & Community Services Presents:
We Are One: South Sudan Culture Fest
May 15, Toronto
(see details at the link)

The Comprehensive Peace Agreement signed on January 9, 2005, ended the Second Sudanese Civil War, which, together with and largely considered a continuation of the First

Sudanese Civil War, engulfed the region in deadly fighting from 1955 right up to its signing. The violent clash between between the Sudan People's Liberation Army (formed in 1983) and the Afro-Arab and Muslim dominated northern regions killed an estimated 1.9 million civilians and displaced another 4 million in one of Africa's longest and bloodiest wars.

The good news is that left in its wake is the Autonomous Government of Southern Sudan, whose capital is Juba. The region, home to more than 60 ethnic groups and extending east and west along the White Nile River (or Bahr el Jebel) south of Egypt and the northern capital of Khartoum, has been a hotbed of conflict for centuries. Needless to say, there's nothing like 50 years of warfare to lay waste to the rich cultural legacy of any region in any era, including the destruction of documents, archives and tapes along with the complete disruption of societies that had been largely untouched by outside influences.

Toronto's Batuki Music Society, whose Executive Director Otimoi Oyemu is himself a native of the region, is looking to lend a helping hand in the rebuilding process through an event that's centred in Ontario, but with contacts that extend throughout the diaspora and back into the African continent. "Culture reinforces identity," explains Nadine McNulty, Batuki's 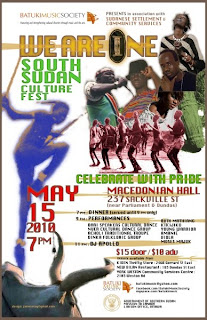 Artistic Director. "This is our first attempt. We're hoping that it will be continued and replicated - not only here, but in Southern Sudan itself. We're hoping to light a spark."

Putting together a showcase of South Sudanese arts proved to be no easy task, however. While rich in heritage, most of the musicians and performance groups were community based, performing at weddings and church events. Reaching out took some time and legwork, including contacting the Sudanese Settlement & Community Services and the Liaison Office of the Autonomous Government of Southern Sudan in Ottawa, who've lent their enthusiastic support. After a concerted effort, the programme was put together, and now includes a wide range of talented performers showcasing everything from traditional song and dance to cutting edge hip hop, and people that are coming from all over the province.

Many of the Sudanese in Canada have come from refugee camps, some young people who've taken advantage of the federal government's refugee student programme. While admirable in intent, it unfortunately only provides for one year of financial support. "So many struggle here," Nadine says, "and not only with finances." Proceeds of We Are One will go towards setting up a scholarship fund to help out, along with providing a networking opportunity. While it's the first celebration of Southern Sudanese culture in... well probably ever, the intent is that it will be far from the last. "Hopefully, it'll be an annual event."