The world would be a duller place without the Whitney Biennial to kick around every two years. - Roberta Smith, New York Times February 28, 1993

It's easy not to like contemporary art, it's true. Notions of classical beauty and of creating things that are pleasing to the eye went the way of the dodo decades ago. So what are we left with? The Whitney Biennial gives you a good snapshot of the contemporary American art scene - and in 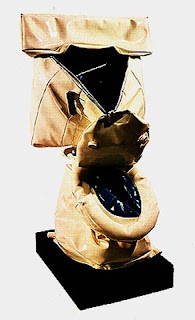 this global village of ours, I think, a notion of current visual arts in general. As the nice young man at the desk suggested, I began at the 5th floor, which is a retrospective of artists in previous Biennales, and worked my way down. It's a mind boggling multiplicity of pieces, to be sure, but here's what stood out for me.

Actually, just to back up a touch, I got there before the 1pm opening, so I browsed the giftshop and highly recommend the literary and visual works of the Guerrilla Girls, including the Illustrated Guide to Female Stereotypes.

Anyway, up to the 5th floor and its survey of former Biennialists. I liked Matthew Barney's video "Drawing Restraint 2", in which the artist negotiates a kind of booby trapped room on ice skates, tethered to the floor as he attempts to make it to continue working on the drawing which hangs up near the ceiling. David Hammons' fabulous spidery sculpture made of rocks, copper, wire, hair and fabric was cool too. And naturally I liked Claes Oldenburg's Soft Toilet (pictured) because I'm always a sucker for Oldenburg.

There was surrealism both grim and whimsical, along with monochromatic abstracts, textile and text based art. A thread of celebrating the mundane ran through it, including Vija Celmin's Heater, (which is a painting of a space heater, just like it says,) and Alex Hays' Paper Bag, (which is, like, a giant paper bag). On to the 4th, and the current Biennial.

Piotr Uklanski's Untitled (The Year We Make Contact) and Untitled (Red Dwarf) met you as you reached the 4th floor, and maybe it's just that, or the fact that it took up the whole wall, but there was defnitely something striking about the piece (pictured below). Maybe it was the colours in warm neutrals and red, or the textural appeal of it. I don't know what it was, but I know that I liked it, to paraphrase. Another stand out was an installation by the Bruce High Quality 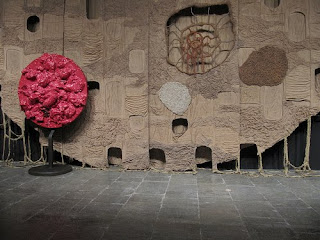 Foundation, an anonymous collective from Brooklyn. A large vintage stationwagon of the type once used for both hearse and ambulance has been painted white, with a video and voiceover playing on its windshield. The part I heard was a running narrative about America as a former flame We fucked America to make America disappear. and so on.

Despite the huge number of works that passed in front of my eyes, the ones that (unfortunately) stick with me are the haunting photographs of Stephanie Sinclair. Self-Immolation: A Cry for Help documents the treatment of Afghani women who've set themselves on fire in a bid to escape lives of abuse from husbands and families at a clinic with only the most rudimentary of supplies. (You can check it out at the link.)

I found the piece I'd describe as happiest in tone of the whole show on the 4th in a full room of Charles Ray's ink on paper stylized drawings of flowers and plants. They had a lyrical, dare I say even pleasing quality about them in the middle of all the post modern angst. It's not that we shouldn't be scared and agitated about all sorts of things, it's just that every once in a while, I need a break and I found it in this room full of his work.

There was something disturbing about Pae White's cotton and polyester wall sized piece that erupted in a cascade of colour and texture, although I had to stop and look. I was noticing a lot of machine like repetition and themes. I watched Alex Hubbard's Annotated Plans for an Evacuation (2009) for a while. In the video, he alters the appearance of a hapless Ford Tempo. He spackles the tires, for instance, all the while an intent expression on his face.

On the 2nd floor, there was a surreal quality about the photography of James Casebere. He creates meticulous tabletop models of a suburban subdivision, in this caseLandscape with 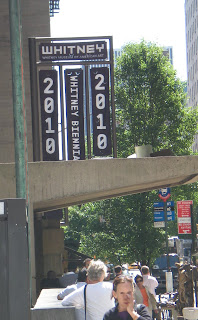 Houses (Dutchess County NY #1 & 2) . There was definitely something compelling and kind've creepy about them. Jessica Jackson Hutchins' Couch for a Long Time was in fact a large couch covered with newspaper clippings of President Barack Obama and a couple of ceramic jars.

My favourite on the 2nd was Canadian ex-pat Aurel Schmidt's Master of the Universe/Flexmaster 3000, a 2010 piece that reminded me in a way of the work I'd recently seen of Wangechi Mutu, in that it was a fantastical multimedia/collage creature. Her ultra beefy minotaur was made of graphite, coloured pencil, symthetic polymer, beer, dirt and blood, puffing on a cig, flexing one arm while the other grasps a staff made of Budweiser cans.

On the 1st floor, of the three artists represented, I have to say the work of conceptual artist Michael Asher left the biggest impression. His was described on a plaque on the wall; a proposal for the Whitney Museum to have the exhibition open to the public 24 hours a day for a period of a week. After it is the Museum's explanation that, due to budgetary restraints, the show would only be open 24 hours for a period of three days from May 26, 1pm to Friday May 28, 11:59pm.

As a Biennial, it is indeed representative of its times.

Attribution for the image of Piotr Uklanski: Untitled (Red Dwarf) and Untitled (The Year We Make Contact), 2010 (and I hope I'm doing this right):