Continues at the Berkeley Street Theatre to June 12 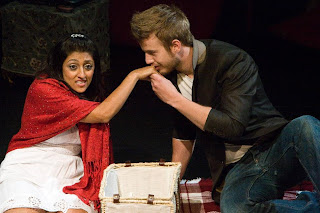 Sometimes you want an evening of theatre to grapple with weighty philosophical issues, other times you want simply to be entertained. Fenulla Jiwani's 30 Dates tackles arguably the weightiest issue of all - finding that one true love - but in a way that's cute and funny, even if a scene or two might hit pretty close to home.

Fenulla has mentioned in interviews that she began writing her own plays because, as a south Asian, she simply never saw her reality depicted on stage, and 30 Dates, as the promo material says, definitely has a "masala" flavour. She plays Priti, a 34 year old who's been caught up in the long hours of the corporate grind and suddenly finds herself the only singleton amongst friends who've been busy getting hooked up, hitched and settled down. She lives with parents who threaten an arranged marriage, so in desperation she turns to www.singlesouthasianmales.com to find "the One".

The play unfolds in a series of short, snappy scenes - the aforementioned dates, naturally, with some commentary from Priti both during and between them. She does everything "right", just like the dating books 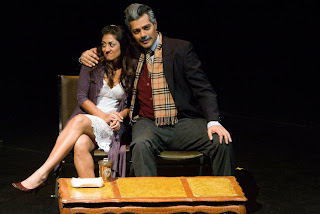 tell you to, making meeting people her number 1 priority, not talking about marriage on the first date and all that. While you wouldn't call any of it cutting edge or overly intellectual, (nor is it designed to be,) the scenarios get more imaginative, and funnier, as they go along. There's the Blackberry addict, the guy who's 30 years older than his online pic, the hung up on his ex guy. There's also the great potentials who get away because they're absorbed in careers or callings, the weirdos obsessed with dance and bowling. Bowling, I should mention, is a bit of a recurring theme.

What holds it all together is a strong cast with the winsome charms of Ms Jiwani at the centre. She's an 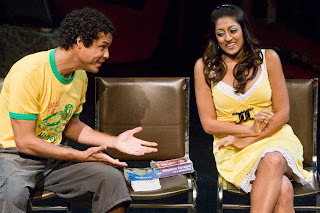 engaging actress and the script has many genuinely funny moments. (The parts where she mimics her mother are hilarious.) She's aided by a octet of cute guys who fill out the various dates with a lot of energy, fleshing out the scenes into believable characters (although the set up date with her parents' friends' son does step into cartoon territory).

The verdict? It's a fun night out and not just for the girls (the many men in attendance enjoyed it as much as us chicks,) - although you should probably wait till after that very first date.