The programme and notes pose three succinct questions to frame this theatrical dialogue about Africa and the West: 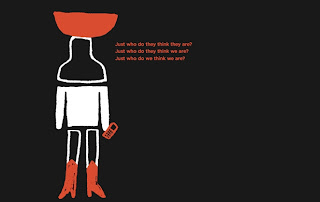 All three plays present very different perspectives on the theme, from the white angst of Peggy Pickit Sees the Face of God (by German theatre's rising star Roland Schimmelpfennig) to Amercian playwright Christina Anderson's GLO, about a young Kenyan writer in NYC, where everyone wants her to stand in for their very on African experience. (I'm doing a full review that will appear in next month's White Elephant Magazine.)

I spoke with Mumbi Tindyebwa Otu, Assistant Director of Shine Your Eye about what it was like to work on this huge project. 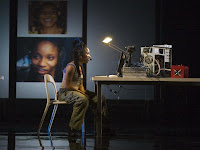 "It's a great play," she enthuses, "the first play by (this) fiction writer. It covers a lot of really important themes. It's a 1 hour play - with a lot of complex issues woven into it." Part of its impact lies in its perspective. It was written by an African about Africans - a Kenyan writer talking about Nigeria. "In the West, we don't usuually see plays written by Africans. It's really refreshing." Kenyan writer Binyavanga Wainaina is currently New York based.

But to deliver its message, a play first has to succeed on its own creative terms. "You can read the script, it's so rich in poetry. The challenge for us is to bring that poetry to life." The piece involves elements like the arresting projections of Germany's renowned FettFilm, (they really added another dimension to the play,) movement and even dance sequences among unexpected elements. "You'll say - I haven't seen anything like this."

In contrast to virtually any other representation of Africans that I can think of, Shine Your Eye presents a thoroughly contemporary picture of life in Lagos. "It looks at the dilemma of youth. They're living in a very high tech, Western influenced world and they're having to carve out their own identity." 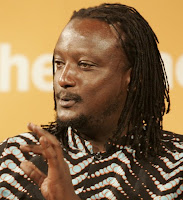 The script also touches on the 419 scams, not just as a criminal activity, but a look at how it's perceived - as a way of getting back that which has been stolen from Nigeria. Profits from a foreign owned oil industry are simply pumped out  right back out of the country. "They want to nationalize oil, but they can't do that without capital," she explains. Shine Your Eye puts the issue in human terms.

The internet itself has played an immeasurable role in literally connecting Africa to the rest of  the world. "It's the age of African high tech. It counters the popular view of Africa as a Stone Age society."

While I won't give away the ending, since there is still time to see the trilogy, I will say it's realistic in that it provides no definitive "answer" or direction to what is, in real life, an ongoing story. "The future of Africa is a powerful, unfinished work."

Visual artist Wengechi Mutu, another Kenyan who's currently Brooklyn based, (and whose show recently closed at the AGO btw,)  has designed the avatar used in the story. "The aim was to involve as many artists as possible." In the script, the avatar is designed by the main character, Beka. "The main character is a computer geek, a game designer," Mumbi says. She also points out that all the actors are either first or second generation African.

Rehearsals were a whirlwind. "A lot of work was done on script development. The script changed as they went along." Naturally, part of her job was to keep track of it all. "My own role has been like something of a chameleon, putting whatever hat on I need to - assisting in communications, keeping track of script changes." And it wasn't only their own production they had to take into account. "It has been a crazy process, with three plays and a rotating team."

The notion of producing three plays rather than one already underscores the underlying message that there is more than one single story about Africa to be told - it is a continent of 1 billion people and 54 odd countries, after all. Mumbi credits Shine Your Eye Director and Volcano founding Artistic Director Ross Manson for having the vision to see the Africa Trilogy from conception to stage. "I can't think of anyone else who could've done this."