African Issues and the Challenge of Artistic Response (LuminaTO)

on June 17, 2010
African Issues and the Challenge of Artistic Response
A LuminaTO event - June 13 (Toronto) 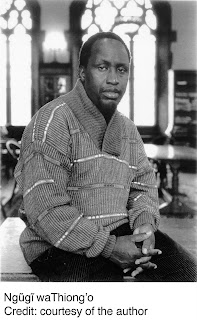 With renowned writer and scholar Ngugi wa Thiong'o, Binyavanga Wainaina, playwright of The Africa Trilogy’s Shine Your Eye and Director of the Chinua Achebe Centre for African Literature at Bard College and moderated by James Orbinski, writer, doctor, and former head of the Nobel-prize winning Médecins Sans Frontières.

The stated purpose of the event was to discuss African issues and the place of artistic response in an arena more often dominated by international development discourse. To what extent can art be a force for change? Should it be? Are some artworks more or less useful than others in such a context? The discussion itself was rather rambling at that, but always entertaining and instructive, with its contrast of the gracious elder statesman of Kenyan literature and the more strident voice of a younger generation.

I had the pleasure of seeing Ngugi wa Thiong'o speak a second time in as many days, and the event was well attended in the George Ignatieff Theatre at the University of Toronto's leafy campus. It began with some remarks by both Kenyan born writers. 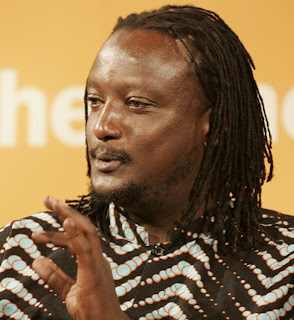 Binyavanga Wainaina (pictured left) spoke about being influenced by Ngugi wa Thiong'o's Decolonizing the Mind. In a speech marked by his ascerbic wit and a sharp sense of observation, he described himself as being part of the first generation who had "to prostitute themselves to go to university because of some mysterious IMF thing," as he called it. He described modern Kenya as a country without a soul, so consumed with building a modern nation economically that they'd produced "a generation of mechanics. Then two years ago, that shit exploded!" In its haste to become a modern nation, Kenya had neglected its culture, and he found himself - along with many others - going back to what Decolonizing the Mind had been saying decades ago. Modernity and freedom as a nation begins in the mind, not with material assets. He mentioned language disparities that still exist, such as not being able to go to study at university in his own native tongue.

Ngugi wa Thiong'o in turn spoke of his admiration for the energy of young African writers and the importance of Binyavanga Wainaina's literary magazine Kwani?. He then went on to share his delight in a recent discovery of the richness of tradition in Kiswahili, and that his most prized recent accomplishment was a published book review that he'd written in that language - something he was more excited about than the publication of his book. He suggested that the key relationship was Africa's relationship to itself. "Language is like the key to rooms of treasure," he said. "The more keys you have, the more access you have to the treasures hidden there."

When it came to his language of preference in writing, while he began his career writing in English, Ngugi wa more recently writes in Gikuyu - he mentioned insisting that his novel Wizard of the Crow contain the citation "translated from the author from Gikuyu". His recently published memoir Dreams in a Time of War was written in English, however, something he said was mainly for its intended audience.

Binyavanga Wainaina is probably best known internationally for his How to Write About Africa rant that appeared in Granta Magazine. As he told the story, the essay was "spam that went viral". He described it as something of  an accident. Granta had come up with an Africa themed issue, and he was so incensed on reading it - "It was full of bukka bukka!" he complained; (he also blamed cold, damp weather in the UK) - that he fired off a 15 page email to the editor. Two years later, when they contemplated a similarly themed issue, he was asked to contribute, and so the email became the eventual piece as published.

He mentioned spending time in Lagos, a place he describes as creatively exciting, reminding him of his student days in 1989 in a Kenya dispossessed by the IMF. The 419 scams (those emails soliciting your bank account for transfers of money) are a particular manifestation of that creativity. "If people learned about African history in school properly, they wouldn't fall for these scams!" he laughed.

Ngugi wa Thiong'o described Joseph Conrad's Out of Africa as "one of the most dangerous books written about Africa" for its flawed perspective of disguised condescension. He mentioned the notion of critical thinking, when the artistic vision is a strong as Conrad's, the "danger" lies in taking in the message without critique. He praised George Lamming's In the Castle of My Skin, and mentioned also that the university in Nairobi was one of the first to teach Canadian literature internationally, in an effort to reach out to the rest of the world. While he speaks and acts against the notion of English as the national, universal default language, he also spoke about collapsing international boundaries in literature.

Binyavanga Wainaina responded by commenting that the past 20 years had done much to strangle the imagination. "You go to a school drama festival, and the kids are regurgitating bullet points," he said. "There are kids writing great poetry who can't eat, and hey, I wrote some shit play about HIV and got $6,000." Against the idea of consciously trying to affect change via artistic response, his take was that change through art comes unintentionally.

In an earlier anecdote, he'd told a funny story about being approached by student activists at Bard on his first day with a campaign to "save the vaginas of the Congo - and they didn't know the capital of Congo!" His point about context was lost on an audience member who added the evening's only dramatic note when she took him to task for joking about mutilated vaginas when the Q&A portion started. His spirited response pointed out that his objection was to the whole monolithic representation of Africans and the dehumanization of the anonymous African vaginas on display. (Ngugi wa Thiong'o declined comment with a chuckle that sounded relieved "I come from a generation that didn't mention those words," he said.)

The last comments came from Ngugi wa. "Africa will continue to be viewed negatively until Africans can view themselves in a positive light," he said. "We conceive of our own people in anthropological terms - defining Africans by clothing worn in the 19th century. The African frozen in time." The importance of native languages lies in their self defining nature; they produce a view that is then projected on the rest of the world, rather thant he other way around. He mentioned Canada's relationship to its own First Nations as another example of the friction of dominant and dominated cultures.

And on international development vis a vis Africa, he had the last word. "Africa gives all the time and receives very little in return, a very little that is projected as a lot."
African writers Binyavanga Wainaina Kenyan literature luminato Ngugi wa Thiong'o toronto arts event