This one appeared on technorati.com a little while ago.

But let me tell you something about Black people
We make this struggling shit look easy!
We do it so well we even named a dance after it,
And it was called:
The Hustle!

So I'm on the 6 train going uptown, and it's like 4:20, 4:30, something like that, and this guy gets on the train carrying a pile of books that he starts to sell. And it's like poetry and fiction. And the poetry looks really good, they're haikus. The book is called Don't Beat Your Children Or They'll Turn Out Like Me. It's sharply perceptive, and sharply satirical. Within a few minutes he's on to the next car, but he tells us all to check him out on Facebook.

Brad Bathgate is something of a force of nature - and you can check out  audio or video of him in action here.

According to some reports, Brad Bathgate, AKA Blue, has sold more than 48,000 books on the streets and subways of New York, although he doesn't actually give a number himself. "I stopped counting how many books," he says. However many, 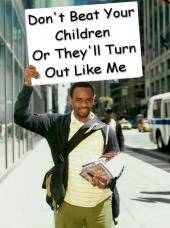 they've all been sold solely through the tireless application of his own shoe leather. "That's how I do it," he says. "That's how I make a living." As his official bio states, he also performs at art galleries, museums, lounges, comedy clubs, colleges, universities and poetry venues in New York, New Jersey, Connecticut, Philadelphia and Baltimore, at times, walking away as open mic winner from the Nuyorican Poetry Café and Jimmy’s Uptown Hottest Poets to name a few.

If you did check out the audio or video of him in performance, it'll come as no surprise to learn that he's a former professional boxer. "I boxed for a while. I like individual sports rather than team sports." Clearly it's a leaning that embodies his writing too. "You gotta be aggressive if you want things in life."

After a childhood spent on the road all over the world as an Army brat, readjustment to American society came as something of a shock, but an experience overall that seems to have heightened his sense of awareness. "When you get outside the box, you get a different perspective," he says. "It just teaches you to see things differently."

He credits a 1998 visit to a poetry reading in Harlem with being the spark that united that insight with the notion of expressing it in words and performance. It's part poetry, part stand up, part verbal assault. "I just go against opinions - trying to find the logic in it," he says. The results are funny, albeit maybe not always for the faint of heart.

"Most people like to play it safe. But life isn't about playing it safe."