on June 27, 2010
Part of the offerings at this year's Toronto Fringe Festival, running this year from June 30 to July 11. All the Fringe offerings are available at the link above.

From a media release.

We’d like to introduce you to Georgia & Leona, a new play that will be making its debut at this year's Toronto Fringe Festival. 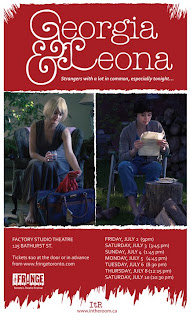 Georgia & Leona are strangers with a lot in common, especially tonight, as each woman returns home from a bizarre and unexpected evening with the past.

“...It’s never made sense to me when people say the rest is history. What happened might be history, but the rest is actually happening right now...”


Check out a trailer here.

Georgia & Leona has multidisciplinary beginnings, having originated as two monologues that have both been previously performed at various musical events, including Sappyfest in 2008 and 2009.

Lara & Misha have been friends and collaborators since high school. In 2001, they co-founded their first company, Garage Band Productions. Unfortunately they had to relinquish the name when Apple, Inc. threatened to sue! Bummer, eh? Ah, what the hell... In the Room is a way better name anyways, don’t you think...?