It was hot, the G20 preps are getting insane downtown and I had to eat here and there (although the
schmancy vendors that closed down Queen's Park Circle had an incredible risotto with osso bucco - I got the 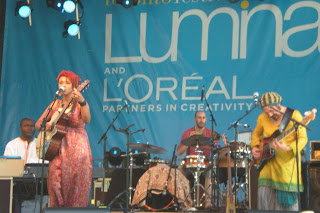 last one!) - so you'll have to forgive the partial coverage of yesterday's incredible musical event. You'll also have to forgive the haphazard pics and their sometimes odd colours and quality, since my camera seems to have a haphazard way of capturing images - or not. Hopefully, the vid clips will help! At any rate, this is what I checked out.

Carmen Souza is a native of Cape Verde, and her 4 piece band hails from Portugal, Italy and Nigeria. They came from London on their way to Paris on tour to promot her latest CD, Protegid

. Her music is a sinuous and melodic blend of modern jazz and Cape Verde polyrhythms. Her songs and the rhythm itself sometimes inspired by the traditions of home, like the one that used the rhythm of how women separate the corn, good and bad. Deceptively swingy, the songs carry you along so you forget the complexities of the music. Her warm, rich and flexible voice pulls it all together. 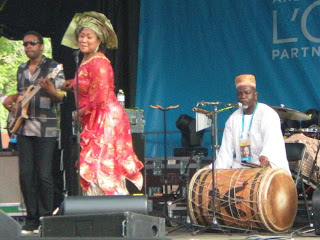 Next up and ending the afternoon programme was Katanen "Cheka" Dioubaté, a native of Guinea and hailing from a traditonal griot lineage. She was backed up by a band of local all stars, including Rich Brown (of Rinsethealgorithm on bass,) the perfect backdrop to her strong, griot style vocals. The music was lit up by the infectious vitality of West Africa, and her big voice and stage presence left a definite impression. 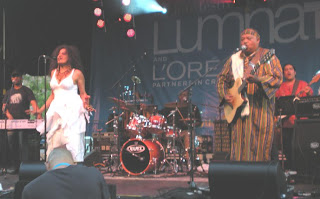 I caught up to the evening's line up with Razia Said, backed up by a band that included hometown blues hero Madagascar Slim. Both natives of Madagascar, Razia is now NYC based. She presented a sexy and glamourous version of the modern African woman in rhythmic and expressive songs that made the most of her strong and sometimes raspy alto. She's on the road promoting her CD Zebu Nation

The crowd was insane by the time Salif Keita hit the
stage. Approaching 61, he's on the top of his game, with a voice that's still nimble and backed up by a band of 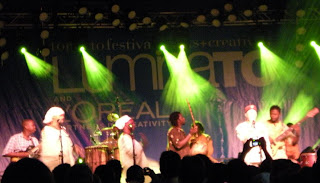 superb musicians. There's not much you can say about the Golden Voice of Africa that hasn't been said already, and the crowd loved, loved them to two encores. Polyrhythms and melody, the kind of West African guitar work that I just adore, a guy who can play the kobo behind his back, it all came together with a crowd that was dancing the whole time. The traditions of Mali come alive in a new century in his music, and his new CD La Difference

was just released earlier this month.