While Man2Man is Edward Ulzen, aka Kwame Stephens', first play, it's hardly his first direct brush with theatre, having produced shows in the past. The play, the result of years of development, will have its premiere
later this month at the venerable Buddies in Bad Times Theatre. 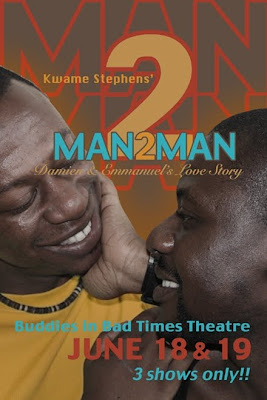 "This project began four years ago," he explains. The script actually began as a short piece he'd written called Damien's Confessions, a scene he'd produced for a reading. He realized, as he heard it, that a big chunk of the story was missing. The impetus itself also came from seeing Da Kink in My Hair, a successful production that gave a voice to the lives of black women. "It hit me that there's nothing that talks about black gay men."

Man2Man tells the story of Damien, a 20-something who's sure of his sexuality and what he wants out of life - a committed relationship with Emmanuel. Trouble is that Emmanuel, in his forties, is largely conflicted about who he is, and not sure of what he wants at all. They meet at a church - of all places - where Damien falls in love with Emmanuel's singing voice. It sounds fairly straightforward, but there are issues involved in such an intimate story, as Kwame points out. "How do you write a two man play and make it interesting?" he asks.

One of the elements that adds texture to the performance is the fact that the actors play multiple characters, and not necessarily all of them similar - one character is Guatemalen, one a British chap. Woven into the story are other characters who make cameo appearances. The setting changes from church to disco, and the staging includes a projected slide show that's independent of the action of the play.

Kwame credits director Canute Lawrence with breathing life into his words. "I can conceptualize it," he says, "but it takes a vision to bring it to life on stage. I sit through the rehearsals more or less as a spectator." Nonetheless, he describes a rewarding back and forth creative flow with both the director and actors. "I sit back and watch them (come up with) something that I never thought of," he says. In fact, it was making connections with Canute Lawrence and actors Frederick O' Neal and Tawiah M'Carthy that led him to finally bring the project to the stage. "I met the right people," he says. "It's my field of dreams."


ABOUT THE ARTISTS:
Man 2 Man is directed by Canute Lawrence whose directorial credits include Marcia Brown Productions' Feminine Justice. Man 2 Man stars Frederick O' Neal as Emmanuel and Tawiah M'Carthy as Damien. The cast features Canute Lawrence as Pastor Everton, and Neville Stephenson plays DJ PJ, Jason and Claude. Frederick O'Neal is a graduate of George Brown's Theatre Arts program and has appeared in numerous productions including See Here! It's Africa and the Caribbean . Tawiah M'Carthy's  The Kente Cloth  was featured at Summer Works Theatre Festival in 2008. Neville Stephenson is an alumnus of the prestigious Vancouver Film School. Man 2 Man is written by Kwame Stephens - writer, educator and producer. Kwame's writing has been published extensively over the past twenty years. This is his first stage play.
black theatre buddies in bad times theatre gay theatre kwame stephens toronto theatre scene