What with a rain delay in the afternoon and some other things I was attending, (and will report on at a later 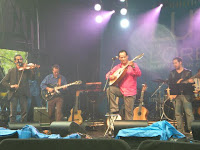 date,) I got to Queen's Park late in the afternoon, in time to hear Montreal's Karim Saada. I was reading in the Toronto Star about how the crowds stayed away because of the wet weather, but they must have left pretty early - the people kept coming and the evening's audience was fairly sizeable.

Karim Saada is Algerian born, and his music reflects a kind of traditonal, rootsy take on the music. (It garnered him a Juno nomination in 2009.) It was his first Toronto appearance, and likely won't be the last. The crowd loved the infectious rhythms and multi-layered harmonies, and the large band included a fiddler while he himself played banjo, mandolin and acoustic guitar.

The afternoon programme capped off with Rachid Taha, another Algerian ex-pat, but who's made France his home for decades. His take on Algerian chaabi pop mixes it with rai rock, guitar heavy punk and even techno, with two keyboard players on board. The mix of instrumentation was interesting, a true global fusion that included the bendir, (a North African hand drum,) and the mandolute, a North African stringed instrument that does resemble something between a mandolin and lute. 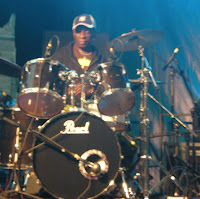 Taha is a character and a half, wiggling his bum at the audience, reading lyrics from a book on the stage at his feet, and with a lit cigarette that seemed to appear between his lips out of nowhere. (He discarded them, still lit, on the stage.) He peppered his performance with observations that were probably largely lost on the crowd - like saying (in French) that Toronto speaks English, like George Bush, or commenting on how Protestant we are. His set was great, building in intensity, and he wasn't the first of the day to complain about the short (hour to an hour and a half) set, even though it seems to have been what was planned all along. 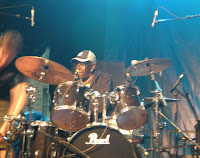 The evenings' programme started with drum legend Tony Allen, a former collaborator of Fela Kuti. In fact, Fela said that there would be no Afrobeat without Tony. The music was of course technically impeccable, and the band an entertaining bunch of characters and dancers that get to fool around while Tony sits at the drum kit. He was also peeved at the length of the set, and probably the delay, remarking tersely that he wasn't going to talk so the brief time could focus on the music, but I think he was at least slightly mollified at the end by the crowd's ultra-enthusiastic response. 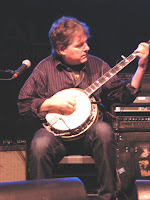 The evening ended off with the musical wizardry of banjo virtuoso Bela Fleck and Bassekou Kouyaté and Ngoni ba. If you're familiar with Bela or The Africa Project, you'll know that their collaborations came about as a result of Bela's search for the origins of his instrument in Africa. Bela began the set on his own, a humble kind of persona with technically brilliant playing. 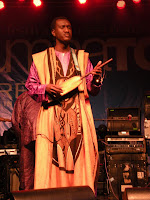 Then Bassekou and Ngoni ba. The ngoni is a kind of plucked lutish instrument, a cousin of the banjo. From Mali, the group plays traditionally inspired music with that West African exuberance and abandon that had the crowd truly fired up and dancing. Another high note came from the impressive vocal acrobatics, in traditional griot style, from Ami Sacko (Bassekou's wife). Bela joined them for the last bit, (he even tried out the dance steps,) ending the evening with a real high note of energy and great music. It's clear these two have a deep and genuine mutual admiration of each other's talent, and seeing them jam together was a real treat. 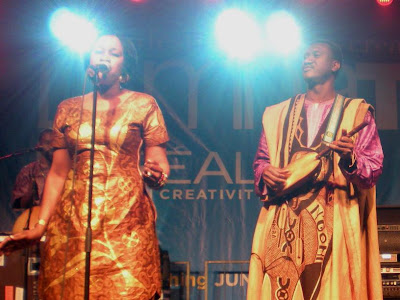 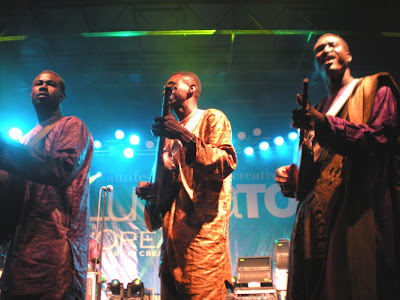 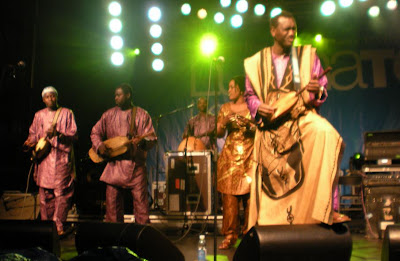