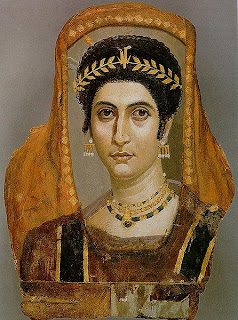 Encaustic painting is an ancient technique, used in ancient Egypt and notably in religious iconography in the early Middle Ages. (The image to the right of a bejewelled woman comes from the Greco-Roman period of Egyptian history, about 100-110 AD.) "Rediscovered" in the early 20th century as a viable medium, it's gained in popularity over the last two decades or so. It's the luminous quality of the finished product that caught my eye one day, and I asked Toronto area artist Hugh Wilson about his work.

Alongside a longstanding career in television production, Hugh has also been a part-time working artist for about the last 13 years - an avocation he plans on retiring into. For the first dozen or so of those years, he focused almost exclusively on large format sculpture, often using trees and other objects that necessitated site specific installations. The largest of these was a pair of 15' dolphins made from a dead tree that currently leap over a swimming pool somewhere in the GTA. While ultimately rewarding, those types of projects are also physically demanding. "I was looking for something that had 'couch appeal'," he explains with a laugh. "I found encaustic - which I thought at first was stupid, but my wife loved it." We'll credit her wisdom, then, for the striking work he's produced over the last year or so.

What he'd found at first were mainly arts & crafts based projects, but then as he kept looking, his interest was piqued. "I found someone using it for landscapes," he says. "I wanted to use it in a painterly way." 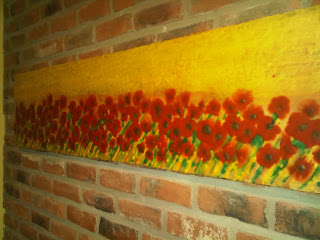 Encaustic painting involves painting with beeswax to which pigment has been added. The resulting work is thick and textured, sometimes to 15 layers thick. The texture can also be worked with, both adding and subtracting from it. The whole process appealed to him as a sculptor. "That is the turn on - if you're a tactile artist," he says."Sometimes I'll scrape it right down to the bottom, on and off, until you get that Eureka! moment," he explains. "Sometimes you find it and then lose it, and have to find it all over again."

Hugh's works tend to be larger, and they tend to take about a year to cure properly. The end result can also be buffed to a ceramic-like shine, accentuating the richly saturated colours.

Hugh has just started to show his work in the Toronto area. While he doesn't currently have a website, if you're interested in his work, drop me a line or comment here and I can put you in touch with him.
encaustic painting toronto artist visual art