World Music at the Gladstone

on June 01, 2010
Batuki Music Society and the Gladstone Hotel have teamed up again this summer to present world music at the Melody Bar the first Friday of the month. From a media release: 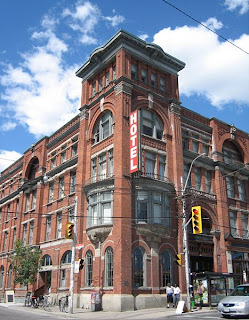 Batuki Music Society and the Gladstone Hotel continue to present the world music concert series that takes place on the first Friday of each month from 7 to 10 pm. at the Melody Bar.  This new Summer phase would include an exciting lineup of groups from; Ethiopian jazz/funk/soul, bluesy Malagasy sounds, popular Trinidadian calypso, to Jamaican roots rock reggae.  Guest DJ Apollo will be spinning his diverse collection of popular African hits.

This concert will feature the finest cast of musicians performing a selection of popular Ethiopian songs that date back to the 1960's, the heyday of Ethiopian music, to the sounds heard today. The lineup includes; Girma Wolde Michael, a prominent saxophonist with a successful career that includes performing with artists such as Mahmoud Ahmed, Aster Aweke, Neway Debebe, etc., Ermias Assebework, a singer with a gifted voice that many Ethiopians have come to compare with Mahmoud Ahmed, he is constantly performing and in high demand, keyboardist/arranger Gezahegn Mamo, plays all of the complicated melodies of Ethiopian music, bass player/multi-instrumentalist Waleed Abdulhamid,  and drummer Daniel Barnes, a jazz player who has mastered the complex rhythms of Ethiopian music.

This Toronto based guitarist/singer/composer, has refined popular Malagasy sounds in his repertoire adding components such as blues, rock, aboriginal chants and contemporary African guitar.  Donné Roberts is also a member of the African Guitar Summit, an outfit composed of the leading guitarists in Canada of African descent.  He is currently working with Marc Nadjiwan of the First Nations, blending traditional Malagasy music with Aboriginal chants that they call African Pow Wow.

Kobo Town is a Toronto-based group whose music draws its inspiration from traditional calypso, roots reggae and dub poetry. Named after the vibrant and turbulent neighbourhood in old Port-of-Spain where Calypso was born, the group strives to recover the social conscience, satirical storytelling and strong acoustic/organic rhythms that characterized Trinidadian music in the past.  The group was founded by Drew Gonsalves, lead vocalist/guitarist and bandleader, accompanied by Derek Thorne on percussion, Cesco Emmanuel on guitar, Rogers Williams on bass and Robert Millicevic on drums.